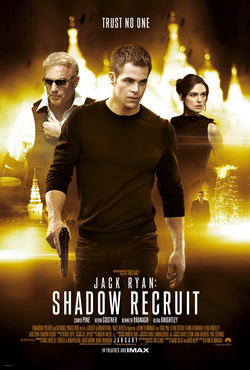 [At the end of my last film review the 1989 version of Batman starring Michael Keaton and Jack Nicholson (with Kim Basinger as eye candy and Batman aka Bruce Wayne aide) I noted that I was heartily sick of having to repeat older writer Phil Larkin’s by now almost patented but tired expression WTF to express some level of  displeasure. WFT apparently not enough though since I am once again stuck, maybe deeply stuck with another one of these turkey sequel action films, in this case fifth rendition, Jack Ryan: Shadow Recruit, an idea whatever its original virtue which is now played out, now tired.
Frankly I had expected after joining Phil in the belly-aching crowd that was central to that piece to be off this so-called action adventure stuff. Belly-aching plus a little fringe review at the end which Phil has become something of a past master at doing. Expected to be reviewing some old time black and white film from the 1940s or 1950s like Humphrey Bogart’s The Maltese Falcon which I had noticed was on site manager Greg Green’s assignment list. Those oldies my preferred reviews young as I am and new to the site as well for reasons explained elsewhere and as a result of having done a well-recognized good job on the first couple I did before that dog of a Batman review.

Those reviews seemingly were my undoing since Phil felt that as an older writer, as somebody who had actually seen the films when he was a wide-eyed kid spending ill-spent Saturday afternoon matinee Strand Theater growing up town double feature complete with small bucket of popcorn spread out to last the distance, he should have dibs on those properties. That was the routine in the old days when his growing up buddy, and for all I know movie companion, Allan Jackson the now deposed and exiled somewhere, I think Utah, former site manager gave him whatever assignment he hankered after. Not so with the new more democratic regime geared more to the younger writers and seeking to reclaim the lost younger audiences who have drifted away from this site established by Greg and the newly-installed Editorial Board set-up by him in the wake of the Jackson purge.

That was how things were supposed to be until Phil started his
f--king campaign against his having to do these silly action adventures, especially when it got to be worn-out nothing but greed-head sequel time. Against me in particular, a kid, a “teacher’s pet” he called me. And it worked as I had to exchange reviews with him with him now doing Bogie’s Across The Pacific which could be easily parlayed into a double-header with the super-classic The Maltese Falcon as the real prize. Phil will probably get that assignment as well. That is the genesis of my relief campaign outlined in that dreadful Batman movie review which backfired in my face because no matter how much venom I threw at the thing Greg, backed up by what is increasingly looking like his toady Ed Board, told me personally that he liked the job I did on that one. WTF.

One day Greg took me into his office and explained like I didn’t know from nothing what this film reviewing assignment procedure was all about, what he was carrying over from his many years first at the hard copy American Film Gazette and later when it switched over to an on-line version. Greg mentioned, and this astounded me, that he had looked at the Gazette archives and noted that over the many years of its hard copy and on-line existence that over forty thousand film reviews had been published. He was not sure how many writers had been involved in that process but he guessed at least one hundred when he had been around the operation. Although the Gazette took advertisements for current movies with few exceptions it did not, he did not assign, reviewers for current films. What the assignment board looked like was usually a hodge-podge of films related to some genre that was surfacing or resurfacing or some actor who had maybe passed away, or had rebooted his or her career, or some particular quirk of the time. Writers would, to increase their range, get a mix of assignments.

Greg stated that frankly he was bringing that same routine over to this site with the caveat that this would include not only films but books, music, culture, politics, social commentary, the whole wider purpose of the site. He noted that although this site had only produced maybe a couple of thousand film reviews, another figure which astounded me, that apparently Jackson had the same attitude although he had centered the reviews on older films and documentaries. (Something I am told that the younger writers chaffed at and which was central to their grievances which brought Jackson low.) Greg assured me that I would eventually get my fair share of good material to write about. With that I accepted this turkey of an assignment and have temporarily called a halt to my belly-aching campaign. Kenny Jacobs]
*********
Guys, writers, so maybe gals too although I don’t know many who took the Cold War into the winter night genre seriously, must have been gnashing their teeth when the ex-Soviet Union went down in flames around 1991 and 1991. (I have no first- hand experience since I was born in 1992.) Guys like Britisher Le Carre with his George Smiley series and here American Tom Clancy, or at least in theory Tom Clancy since this dog of film, Jack Ryan: Shadow Recruit , the fifth in the film series is merely based on the character of Jack Ryan and not something Clancy actually wrote. That gives you an exact idea of how lame this whole greed-head production is, how tired even the most fervent devotee of the genre must be to wade through this mush. Yeah, those guys must be have been crying in their beer once the very real tensions of a bi-polar world complete with serious nuclear weaponry in the balance (still around in the USA and Russia but less threatening right now in those quarters) turned into the still current uni-polar world dominated by American military power with not much to stop it.

That post-Soviet faded tension is reflected in the hardly stellar plotline of this film once the mighty USSR was reduced to mere Russia size and less of a threat to American world order (which may be taking another curve of late with the Trump America First era but the film pre-dates that situation). Jack, dear good guy clean Jack, played by Chris Pine, after 9/11 signed up like a lot of guys in America to do serious damage to Islamic fundamentalists in places like Afghanistan and Iraq. Jack took his beating in the former though and crippled up left the military for what would be a career on Wall Street based on his vast education in economic. The CIA though in the person of Tom Harper, played by visibly aging Kevin Costner, gets him to do some covert actions, to check for any dramatic changes in the world financial markets. Worked as a closed mouth “mole” until needed.


some nefarious Russians, no longer able to wield their former military might have decided that melting down the world financial markets will restore some prestige to Mother Russia. Thus the chase in on. Jack a crackerjack trend spotter sees what those nefarious Russians are up to and takes action including the inevitable car chase/stand-off which entails a car bomb headed toward Wall Street. Surprise, surprise that car winds up in the East River without Jack of course and with the Russian plot crushed in the embryo. A little eye candy, sympatico by Kiera Knightley as Jack’s longtime live-in girlfriend gives the inevitable boy meets girl romantic twist a run. Sorry for my language but I have to say it- WTF.
Posted by american left history at 10:21 AM