'Inside/Out':
The poetry of Marilyn Buck

Marilyn Buck's fellow poet and mentor David Meltzer writes that once when he was visiting her in Dublin Federal Correctional Center (prison), she expressed a desire to be known "not as a political prisoner poet, but simply as a poet."

For this collection, racing against uterine cancer until her death, she and a small group of now-surviving artistic and political friends (Meltzer, Felix Shafer, and Miranda Bergman, with poet Jack Hirschman and City Lights publisher Elaine Katzenberger) selected 63 poems that will give general poetry lovers their first real opportunity to savor her body of work.

Marilyn Buck was a Ragstaffer in Austin and Newsreel activist in San Francisco before becoming active in the Black Liberation movement. She died in August, 2010, in her 63rd year, after 25 years in federal prison and 19 days of freedom.

She began writing poetry in prison as one of the few means of self-expression open to her. As she wrote in her Master's thesis, On Becoming a Poet and Artist: Beyond Censorship to Re-Imagination (New College of California, Fall 1999, author's copy), "I was a censored person by virtue of being a political prisoner. Ironically, defiance of State censorship reduced me to self-censorship. Nevertheless, I needed to affirm myself... I turned to poetry, an art of speaking sparely, but flagrantly."

Buck's earlier collections (a chapbook, Rescue the Word [San Francisco and New York: Friends of Marilyn Buck, 2001], and a CD, Wild Poppies [San Francisco: Freedom Archives, 2004]), and other published works, while including poems that didn't spring from political or criminal convictions or fugitive experience, leaned heavily in that direction and by her choice.

While Inside/Out certainly doesn't slight her political and prison-related work, we may also see several other facets of a woman who was much more than a one-dimensional icon. In almost all, she preserves her hallmark "spare... but flagrant" style.

Some selections will be familiar to Buck's readers, and already beloved. "Clandestine Kisses" celebrates love against the rules with defiant elán. Like many of her poems, it summons a vision of irrepressible life finding a foothold in a world of steel and concrete.

"Woman with Cat and Iris" is another understated, sleight-of-hand creation: a tranquil Sunday morning illusion of normalcy dissolves in clanging steel doors and the shouts of guards, but the cat and flower linger, Cheshire-like, in the mind.

Marilyn wrote often about how the human mind can escape the sterility of prison, even for a moment; road maps, perhaps, for other prisoners, of whatever barred crucible, with "Gone" the most direct. "Night Showers," celebrating washing off the pain and grief of each day along with its grit and grime, and "Woman's Jazz Band Performs at Women's Theater" also mine this theme.

Incarceration is in large part a punishment because of its sensory deprivation. Deprivation from color, movement, textures, tastes, rain, the moon, etc., loom large in Buck's work, but as Meltzer notes, it also bursts with music.

The jazz cadences of her longer poems beg for a saxophone's honk and moan, a conga's quick counterpoint. The centrality of music and poetry in liberation struggles past and present, personal and political, is never lost on her. Here are a few lines from the previously unpublished "Reading Poetry":

Chao Ut reads Vietnamese poetry
I tell her she reads well
she smiles...

she reads another poem
it sounds like music, I say
yes I'll read it again
the way we everyday talk
she reads
do you hear?
yes, I say...

...I wait in the car's darkness I count
minutes and coins
11:00 I step through blinking neon
into the vacant booth drop coins
and hear a click

Buck had a dry, playful wit, well-known to friends but seldom given rein in her published work. It's nice to find it here in a few poems such as "Definition":

Many poems seen for the first time in this collection are intensely personal. "Our Giant" recalls the darker side of Marilyn's father. Louis Buck was defrocked as an Episcopal priest for opposing segregation. Crosses were burned on the family's lawn during Marilyn's childhood.

A courageous, outspoken crusader to the world, he was a controlling tyrant to his wife and children, demanding perfection, as he defined it, from each of them:

a handsome rundown football player
like a thundering giant
he dangled our lives from his fingertips
four morsels
we hovered over the chasm of his rage
our tears seasoned his wounds
swallowed whole
we were regurgitated
each daybreak...

When Marilyn's increasing radicalism led to her involvement in Black Liberation groups embracing armed self-defense, their estrangement increased. After she became a fugitive from the law, she and her father had no contact for many years.

Yes Louis' uncompromising ideals and stubborn courage clearly informed much of her own conduct, including, some might say, the self-destructive parts. Their reconciliation before his death was extremely important to Marilyn. Here she expresses the terror, admiration, and eventual compassion he inspired:

...he was our giant, defrocked
he stomped in "jesus sandals"
stained the silken robes
of rich men's hypocrisy
a jeremiah in farmboy overalls
and starched Mexican wedding shirt

Her mother, Virginia, to whom the volume is dedicated, is also recalled in "Loss." Her death from the same type of cancer that would claim Marilyn was not only a grievous loss in itself, but a blow to the hope that Marilyn might survive to a healthy old age in freedom. 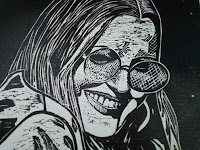 Virginia Buck defied (and eventually divorced) Louis, visiting as often as possible the daughter she "could not save... from vengeful-suited men nor from myself." Marilyn was not allowed to attend either parent's funeral, another deprivation that took a deep emotional toll.

Besides her poetry, much still uncollected, Marilyn Buck over time developed her ability to express herself "sparely yet flagrantly," making significant contributions to radical and liberation theory and discussion, contributing to numerous journals and publications.

She taught herself Spanish, and in 2008 City Lights published her translation of exiled Uruguayan poet Cristina Peri Rossi's collection, State of Exile, in a bilingual volume.

In prison, Marilyn became a certified literacy instructor and taught hundreds of women to read. She learned and taught yoga, became an advocate for women's healthcare, and organized AIDS education and prisoner fundraising activities. She mentored uncountable prisoners, prisoners' family members, and poets around the world. She was a voracious reader who maintained a vast and varied correspondence, including with my grateful self.

One fault with Inside/Out is that is doesn't tell when the poems were written, except those with dates in their titles. This would have been useful not only to academic readers but to friends and fellow poets who will long to know when such epic works as "Blake's Milton: Poetic Apocalypse" and "Revelation" were composed. Much longer than most of her other poems, these works blaze with intense visions wherein prison walls have neither substance nor meaning, such as these lines from "Revelation":

...Do you see demons and desolation, hear sounds
of screams, wailing? Or smell sulfur burn
behind your tongue – a taste of wormwood
and aloes? Or encounter the touch as a torch upon the skin?
You imagine fire but it might be ice...

There are no apologies here, no appeals for special consideration. As she rejected white-skin privilege in life, binding herself to oppressed people in words and deeds, Marilyn Buck sought no deathbed, deus ex machina salvation from prison, cancer, or the condemnation of the self-righteous.

For those who loved and miss her, Inside/Out is a special gift, long dreamed-of. For those who don't know her, or who've had limited knowledge of her as person or poet, here she is at last free to speak outside State restraints. No more bars, shackles, solitary confinements, or super-max jails.

The last poem included is "The First Year You Learn to Wear the Robes":

his teacher told him on stepping into the Zen priesthood

to wrap one robe and then another, is not as simple as it looks
rather this is not a simple matter of getting dressed, not a covering
a process of finding oneself inside one's situation,
revelation

In my heart, I see Buck's eager spirit wearing new robes now, a rebel angel inspiring poets and activists around the world to work compassionately yet relentlessly for justice, peace, and freedom. She lives this day, and tomorrow, in the words left behind.

Read articles (and poems) by and about Marilyn Buck on The Rag Blog.