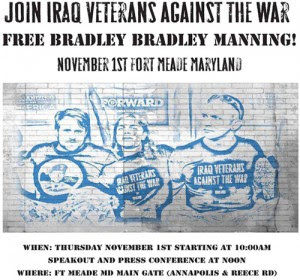 As Army Private First Class Bradley Manning nears 900 days in jail without trial, his lawyer moves to dismiss all charges for lack of a speedy trial. Beginning Tuesday, October 30, the government’s witnesses will try to explain away the prosecution’s extensive delays. Meanwhile, over 14,000 supporters of Bradley Manning have now donated to his defense fund—over the last three weeks alone raising $50,000 during a matching grant challenge by the Brightwater Fund. On Thursday, November 1, members of Iraq Veterans Against the War will lead a rally and speak-out for Bradley at Fort Meade, Maryland.

When Bradley Manning returns to Ft. Meade on Tuesday, October 30, he’ll have spent nearly 900 days in jail awaiting court-martial trial. That’s almost two and a half years wondering whether he’ll be spending the rest of his life in jail, and whether he’ll get to see the “debates, discussions, and reforms” that chat logs suggest he sought. That’s two and a half years too long.

Bradley’s lawyer, David Coombs, will argue his most recent motion to dismiss charges with prejudice for lack of a speedy trial, which denounces and seeks accountability for the government’s inaction, unjustifiable delays, and sheer disregard for PFC Manning’s constitutional rights (1). RCM 707 affords 120 days from arrest to arraignment, but Bradley was arraigned nearly two years after his arrest in May 2010. UCMJ Article 10 compels the prosecution to act diligently and expediently, yet the government was inactive or needlessly slow for months prior to Bradley’s first pretrial hearing.
Judge Denise Lind and the parties have agreed to bifurcate this speedy trial motion: from October 30 to November 2, the government will bring its witnesses to testify. But the defense won’t be able to argue its portion of the motion until the December 10-14 hearing, which comes after the Article 13 motion to dismiss based on Bradley’s conditions at Quantico, which Coombs will litigate November 27-December 2. By that time, Bradley will have surpassed 900 days in jail without trial.

Next week, the government will call three witnesses to the stand, to attempt to account for the several pre- and post-arraignment delays that have protracted Bradley’s proceedings. The defense had also requested two of these witnesses, Col. Carl Coffman and Master Sgt. Monica Carlile.
Carl Coffman is the Special Court Martial Convening Authority for Bradley’s pretrial proceedings, so he signed off on almost all of the government’s delays, marking them as excludable from the speedy trial clock. In January, Coffman denied the defense’s request to depose nine essential witnesses, including Defense Sec. Robert Gates and State Secretary Hillary Clinton, citing the “difficulty, expense, and/or effect on military operations outweighed the significance of the expected testimony.” Coombs derided this decision as “yet another example of the government improperly impeding the defense’s access to essential witnesses” (2).

Coffman is expected to explain why he signed off on the government’s delays, and why they were excluded from the speedy trial clock.

Monica Carlile was a paralegal at the Office of the Staff Justice Advocate in the Military District of Washington (apparently before she was promoted to Master Sergeant), when she signed one of the government’s delays for Coffman. Carlile is expected to explain why she signed off on that delay, why it was excluded from the speedy trial clock, and her authority to sign in Coffman’s place.

Third is Bert Haggett, whom the prosecution deems a classification expert and whom the Army cites as an Information Security Point of Contact. Kevin Gosztola writes that the government will call Haggett to testify to “how long it takes to clear documents requested by defense for discovery evidence. He apparently worked on a classification review of the unclassified portion of the Army CID investigation into Manning.”

With these witnesses, the government will try to show that it had no choice but to wait nearly two years to arraign PFC Manning, and that the mere scope of information and lengthy classification review process takes a long time. But Coombs’ motion preempts those arguments multiple times, noting that the government has vastly more resources than the defense to wade through these myriad documents, and that the prosecution both didn’t need to wait for the reviews to go to trial and didn’t sufficiently pressure the Original Classification Authorities to conduct the reviews more quickly.

Suspending the pretrial process is only to the government’s advantage. The defense is paid by grassroots donations from around the world, and two and a half years of delays have pushed legal expenses to nearly $250,000.

But Bradley’s supporters have countered this effort in inspiring ways. The Brightwater Fund recently announced that it would match donations to the defense fund dollar for dollar up to $50,000, and we’ve surpassed that goal already, now up to $55,000 and counting (3). That number will continue to rise this week, as rock-and-roll legend Graham Nash will perform in Santa Monica, CA, and ticket proceeds from that event will go to the Bradley Manning Support Network (4).

Veterans are responding as well. At an anti-NATO rally this summer, several Iraq Veterans Against the War publicly disowned their military medals, some in honor of PFC Bradley Manning. Those and more veterans are holding a rally and speak-out for Bradley on Thursday, November 1, just outside of Ft. Meade while he’s in court (5).

When Bradley Manning’s court-martial trial finally gets underway on February 4, 2013 – if it isn’t delayed yet again – he’ll have been imprisoned for nearly 1,000 days. This trial is anything but speedy, and the government has thus far enjoyed total immunity for violating Bradley’s basic rights. It’s long been time for that to change.