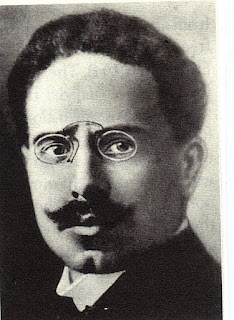 EVERY JANUARY WE HONOR LENIN OF RUSSIA, ROSA LUXEMBURG OF POLAND, AND KARL LIEBKNECHT OF GERMANY AS THREE LEADERS OF THE INTERNATIONAL WORKING CLASS MOVEMENT.


As a deputy in the Reichstag he was one of the first SPD representatives to break party discipline and vote against war credits in December 1914. He became a figurehead for the struggle against the war. His opposition was so successful that his parliamentary immunity was removed and he was imprisoned.


Freed by the November revolution he immediately threw himself into the struggle and became with Rosa Luxemburg one of the founders of the new Communist Party (KPD). Along with Luxemburg he was murdered by military officers with the tacit approval of the leaders of the SPD after the suppression of the so-called “Spartacist Uprising” in January 1919.
**************
Markin comment:


This comment was written in 2006 but the main points hold true today:


I recently (2006) received a comment from someone whom I took earnestly to be perplexed by a section of a commentary that I had written where I stated that the minimum necessary for any anti-war politician was to vote against the Iraq war budget in a principled manner. Not the way former Democratic presidential candidate Massachusetts Senator John Kerry’s (and others) dipsy-doodled votes for and against various war budgetary requests in 2004. And certainly not the other variations on this theme performed recently by aspiring Democratic presidential candidates Senators Obama and Clinton in the lead-up to 2008. Nor, for that matter, the way of those who oppose the Iraq war budget but have no problems if those funds were diverted to wars in Afghanistan, Iran , North Korea, China or their favorite ‘evil state’ of the month. What really drew the commenter up short was that I stated this was only the beginning political wisdom and then proceeded to explain that even that would not be enough to render the politician political support if his or her other politics were weak.  The commenter then plaintively begged me to describe what politician would qualify for such support. Although I have noted elsewhere that some politicians, Democratic Congressman James McGovern of Massachusetts and presidential candidate Democratic Congressman Dennis Kucinich stand out from the pack, the real anti-war hero on principle we should look at is long dead-Karl Liebknecht, the German Social-Democratic leader from World War I. Wherever anyone fights against unjust wars Liebknecht’s spirit hovers over those efforts.


…I do not believe we are lacking in physical courage. What has declined is political courage, and this seems in irreversible decline on the part of parliamentary politicians. That said, I want to finish up with a woefully inadequate political appreciation of Karl Liebknecht, member of the German Social Democratic faction in the Reichstag in the early 1900’s. Karl was also a son of Wilhelm Liebknecht, friend of Karl Marx and founder of the German Social Democratic Party in the 1860’s. On August 4, 1914, at the start of World War I the German Social Democratic Party voted YES on the war budget of the Kaiser against all its previous historic positions on German militarism. This vote was rightly seen as a betrayal of socialist principles. Due to a policy of parliamentary solidarity Karl Liebknecht also voted for this budget, or at least felt he had to go along with his faction. Shortly thereafter, he broke ranks and voted NO against the war appropriations. As pointed out below Karl Liebknecht did much more than that to oppose the German side in the First World War. THAT, MY FRIENDS, IS THE KIND OF POLITICAN I CAN SUPPORT. AS FOR THE REST- HOLD THEIR FEET TO THE FIRE.


One of the problems with being the son of a famous politician is that as founder of the early German Social Democratic Party Wilhelm Liebknecht's son much was expected of Karl, especially on the question of leading the German working class against German militarism. Wilhelm had done a prison term (with August Bebel) for opposition to the Franco-Prussian War. As for Karl I have always admired that famous picture of him walking across the Potsdam Plaza in uniform, subject to imprisonment after loss of his parliamentary immunity, with briefcase under arm ready to go in and do battle with the parliamentary cretins of the Social Democratic Party over support for the war budget. (THIS PICTURE CAN BE GOOGLED) That is the kind of leadership cadre we desperately need now. REMEMBER HIS FAMOUS SLOGANS- "HE MAIN ENEMY IS AT HOME’-‘NOT ONE PENNY, NOT ONE PERSON (updated by writer) FOR THE WAR." Wilhelm would have been proud.