As The 100th Anniversary Of The First Year Of World War I (Remember The War To End All Wars) Continues ... Some Remembrances-Writers’ Corner -Erich Maria Remarque


And then the war drums intensified, the people, their clients, patrons and buyers, cried out their lusts and they, they made of ordinary human clay as it turned out, poets, beautiful poets like Wilfred Owens who would sicken of war before he passed leaving a beautiful damnation on war, its psychoses, and broken bones and dreams, and the idiots who brought humankind to such a fate, like e. e. cummings who drove through sheer hell in those rickety ambulances floors sprayed with blood, man blood, angers, anguishes and more sets of broken bones, and broken dreams, like Rupert Brooke all manly and old school give and go, as the marched in formation leaving the ports and then mowed down like freshly mown grass in their thousands as the charge call came and they rested, a lot of them, in those freshly mown grasses, like Robert Graves all grave all sputtering in his words confused about what had happened, suppressing, always suppressing that instinct to cry out against the hatred night, and like old school, old Thomas Hardy writing beautiful old English pastoral sentiments before the war and then full-blown into imperium’s service, no questions asked old England right or wrong. Jesus what a blasted nigh that Great War time was. 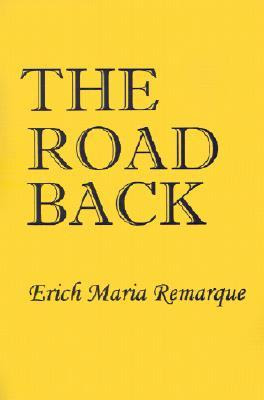 We’d love your help. Let us know what’s wrong with this preview of The Road Back by Erich Maria Remarque.
Thanks for telling us about the problem.

Preview — The Road Back by Erich Maria Remarque

by Erich Maria Remarque
The Road Back 4.29 of 5 stars 4.29  ·  rating details  ·  1,854 ratings  ·  49 reviews
After surviving several horrifying years in the inferno of the Western Front, a young German soldier and his cohorts return home at the end of WW1. Their road back to life in civilian world is made arduous by their bitterness about what they find in post-war society. A captivating story, one of Remarque's best.
Paperback, 352 pages
Published December 1st 2001 by Simon Publications
more details...
Posted by american left history at 10:20 AM