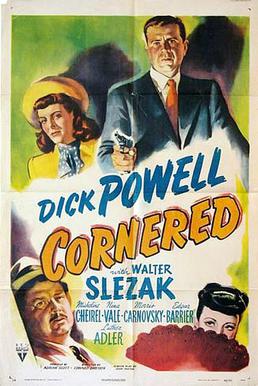 I took this film review with all hands. This anti-fascist film Cornered from 1945 which featured performances by two  men, Luther Adler and Morris Carnovsky and two men director Dymtryk (who would later turn stoolie to protect his oh so very precious career) and producer Adrian Scott, who were to be very soon on the notorious and scandalous Hollywood black-list as the post-World War II red scare Cold War night descended on the Western World is just the vehicle I needed to express some things about what is going on in the United States in an age when the fascists here (and internationally) are hearing the siren call of their return to the glory days. I had not thought as I passed my sixth decade that I would be spending time, much time anyway, worrying about the rise of the fascist movement kindled by events emanating from the White House and other high spots in the Western firmament. So be it. The fascists were buried deep down in some hole and as this film, this now cautionary tale film, points out they are keen to arise like phoenix from the ashes. As the main notorious villain and object of an international manhunt, Jarnac, played by red scare Cold War black-listed Luther Adler, said when confronted by the anti-fascists toward the end of the film as long as there are hunger men (and women) ignored by the “winners” in the global economy there will always be people like him ready to follow any half-mad adventurer. Good point, and a good reason to seriously re-start that international anti-fascist united front while there is still time, while the fascists and their allies, acknowledged and not so, are still relatively small in numbers. Remember 1933 was too late and maybe 1923 had been too (the year of the Munich putsch attempt).

I should explain that when I mentioned I grabbed this film with “all hands” I was understating the case since the reader may not know that I have not done a film review since the days of the East Bay Other in the late 1970s before it folded like many other alternative hard-copy operations. Then I was primarily interested in French cinema, Godard, Truffaut, Celine, Dubois and other European cinematic efforts with an occasion scape handed to me by editor Sally Simmons doing film noir material helped by my association with Sam Lowell who wrote the definitive book on the subject back in the 1970s. Sam, a guy I grew up with in North Adamsville and I spent many an ill-advised (then) afternoon watching noir double-features at the old Strand Theater which was our home away from home when things got too crazy in our respective large households.

As I mentioned this film can stand as a cautionary tale for our times as well as a summing up for what happened, what ignited the backdrop to World War II. The fascists, called other names like Nazis and ultra-nationalist but fascists will do these days, rose up to smite the calm Europe, the so-called calm Europe from the days when World War I was thought, even by rational men after the carnage, to be the war that ended all wars. But like all mass movements which built up a head of steam they expanded internationally, had supporters who went the German and Axis tanks rolled in across Europe acted as fifth columns, acted in defense of the new world order as if their lives depended on it. Which it did if they lost. But when they were riding high, well, scum, like the main villain Jarnac, a Frenchman, a Vichy when the Fascists came storming into France, taking Paris and leaving the south to be administered by collaborators worked like seven dervishes to keep their power and place. Among Jarnac’s actions, the one that drives the action of the film and which will eventually lie him low he summarily had a cadre of resistance fighter shot and buried in their hideout caves. This Jarnac then left for parts unknown leaving little or no paper or physical trail behind him except that he was to be considered dead, not real dead but fake dead so you know which way the winds will blow hereafter.

Among the resistance fighters executed in the caves was the too short time married wife of one Canadian Air Force pilot,  Gerard, played by Dick Powell last seen in this space, according to Seth Garth who did the review, in the film adaptation of  Raymond Chandler’s Private Detective Phillip Marlowe classic Farewell, My Lovely ( on screen titled Murder, My Sweet) also directed by Edward Dymtryk, who wanted to know, and know fast as you will find out, who ordered the execution of his own people, of Frenchmen, of his wife so it was personal with him. From various sources we find out that it was Jarnac and his underlings who did the dastardly deed and that Jarnac was presumed to be dead as already mentioned. Marlowe was a tough as nails no nonsense P.I. and Gerard is no less a tough anti-fascist fighter cum enraged widower. The chase is on.

Not surprisingly, take note, Gerard, picks up Jarnac’s trail in Buenos Aires, meaning that Jarnac was not without resources, contacts or organization. (The “take note” part is today “on the low” there are similar resources available for fascists and their allies to do their dastardly work.) Of course Buenos Aires was a favored watering hole, a pleasant waiting area, for legions of fascists on the run as the clamp closed down on them in Europe so plenty of intrigue and cash are on the line. Getting nowhere for a while Gerard meets an independent agent who will sell his services to the highest bidder, played by Walter Slezak, who is out to make as many dishonest dollars as he can by working the rat hole circuit of scum fleeing Europe. He leads Gerard to Madame Jarnac, the widow, but she is really just a front, hired help to keep the charade going.

From that meeting on it is tag team who will get to Jarnac first-enter what Gerard thinks are some unsavory characters but who in reality are anti-fascist fighters looking for Jarnac too-to bring him to Nuremburg-style justice-to see him hang high if it comes to that. Gerard though keeps getting in his own way (which he will admit at the end) and after fake news Madame Jarnac gives him a sliver of information about where Jarnac might be meeting others to pull off some nefarious caper on the road back to the glory days, to power he is doggedly on the trail. Winds up grabbing Jarnac and killing him to the chagrin of the anti-fascist agents. It can’t happen here, it can’t happen again. Believe that if you will and dismiss this as a nice political thriller. Then look at today’s world headlines. Jesus.