*****Victory To The Fast-Food Workers The Vanguard Of The Fight For $15......Fight For $15 Is Just A Beginning-All Labor Must Support Our Sisters And Brothers 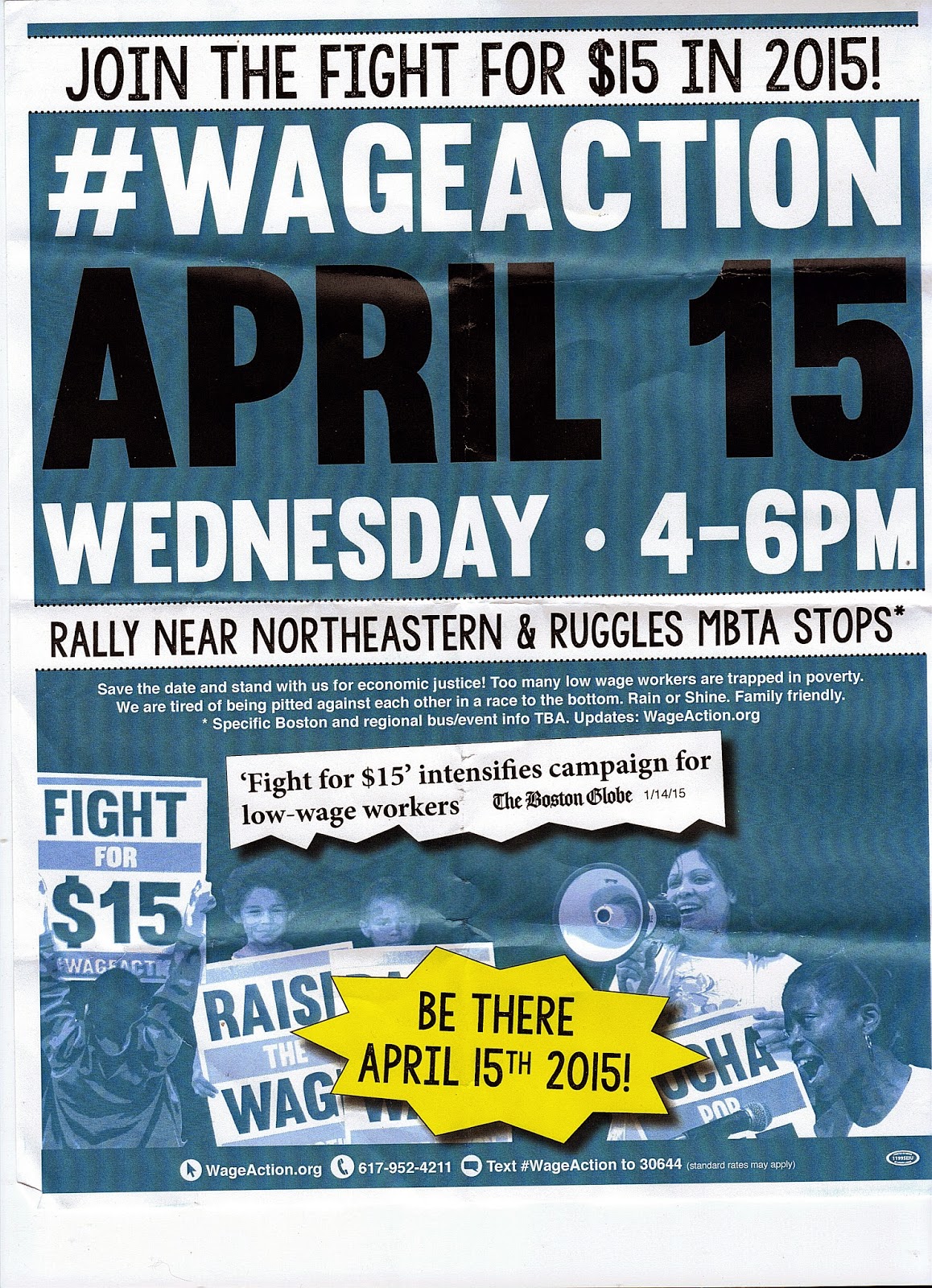 From The Pen Of Sam Lowell


Frank Jackman had always ever since he was a kid down in Carver, a working class town formerly a shoe factory mecca about thirty miles south of Boston and later dotted with assorted small shops related to the shipbuilding trade, a very strong supporters of anything involving organized labor and organizing labor, anything that might push working people ahead. While it had taken it a long time, and some serious military service during the Vietnam War, his generation’s war, to get on the right side of the angels on the war issue and even more painfully and slowly on the woman’s liberation and gay rights issues, and he was still having a tough time with the transgender thing although the plight of heroic Wikileaks whistle-blower Army soldier Chelsea Manning had made it easier to express solidarity, he had always been a stand-up guy for unions and for working people. Maybe it was because his late father, Lawrence Jackman, had been born and raised in coal country down in Harlan County, Kentucky where knowing which side you were on, knowing that picket lines mean don’t cross, knowing that every scrap given by the bosses had been paid for in blood and so it was in his blood. Maybe though it was closer to the nub, closer to home, that the closing of the heavily unionized shoe factories which either headed down south or off-shore left slim leaving for those who did not follow them south, slim pickings for an uneducated man like his father trying to raise four daughters and son on hopes and dreams and not much else. Those hopes and dreams leaving his mother to work in the “mother’s don’t work” 1950s at a local donut shop filling donuts for chrissakes to help make ends meet so his was always aware of how close the different between work and no work was, and decent pay for decent work too. How ever he got “religion” on the question as a kid, and he suspected the answer was in the DNA, Frank was always at the ready when the latest labor struggles erupted, the latest recently being the sporadic uprisings amount fast-food workers and lowly-paid Walmart workers to earn a living wage.


One day in the late summer of 2014 he had picked up a leaflet from a young guy, a young guy who later identified himself as a field organizer for the Service Employees International Union (SEIU), a union filled to the brim with low-end workers like janitors, nurses assistants, salespeople, and the like, passing them out at an anti-war rally (against the American escalations in Syria and Iraq) in downtown Boston. The leaflet after giving some useful information about how poorly fast-food worker were paid and how paltry the benefits, especially the lack of health insurance announced an upcoming “Fight for $15” action in Downtown Boston on September 4, 2014 at noon as part of a national struggle for economic justice and dignity for the our hard working sisters and brothers. He told the young organizer after expressing solidarity with the upcoming efforts that he would try to bring others to the event although being held during a workday would be hard for some to make the time.


In the event Frank brought about a dozen others with him. They and maybe fifty to one hundred others during the course of the event stood in solidarity for a couple of hours while a cohort of fast-food workers told their stories. And while another cohort of fast-food workers were sitting on the ground in protest prepared to commit civil disobedience by blocking the street to make their point. Several of them would eventually be arrested and taken away by the police later to be fined and released.


Frank, when he reflected on the day’s events later, was pretty elated as he told his old friend Josh Breslin whom he had called up in Maine to tell him what had happened that day. Josh had also grown up in a factory town, a textile town, Olde Saco, and had been to many such support events himself and before he retired had as a free-lance writer written up lots of labor stories. The key ingredient that impressed Josh in Frank’s description had been how many young serious black and Latino workers had participated in the actions. Later than night when Frank reflected further on the situation he broke out in a smile as he was writing up his summary of his take on the events. There would be people pass off the torch to when guys like him and Josh were no longer around. He had been afraid that would not happen after the long drought doldrums in the class struggle of the previous few decades. Here is what else he had to say:


No question in this wicked old world that those at the bottom are “the forgotten ones,” “los olvidados,” those who a writer who had worked among them had long ago correctly described as the world fellahin, the ones who never get ahead. This day we are talking about working people, people working and working hard for eight, nine, ten dollars an hour. Maybe working two jobs to make ends meet since a lot of times these McJobs, these Wal-Mart jobs do not come with forty hours of work attached but whatever some cost-cutting manager deems right to keep them on a string and keep them from qualifying for certain benefits that do not kick in with “part-time” work. And lately taking advantage of cover from Obamacare keeping the hours below the threshold necessary to kick in health insurance and other benefits. Yes, the forgotten people.


But let’s do the math here figuring on forty hours and figuring on say ten dollars an hour. That‘s four hundred a week times fifty weeks (okay so I am rounding off for estimate purposes here too since most of these jobs do not have vacation time figured in).That’s twenty thousand a year. Okay so just figure any kind of decent apartment in the Boston area where I am writing this-say one thousand a month. That’s twelve thousand a year. So the other eight thousand is for everything else. No way can that be done. And if you had listened to the young and not so young fast-food workers, the working mothers, the working older brothers taking care of younger siblings, workers trying to go to school to get out of the vicious cycle of poverty you would understand the truth of that statement. And the stories went on and on along that line all during the action.


Confession: it has been a very long time since I have had to scrimp and scrim to make ends meet, to get the rent in, to keep those damn bill-collectors away from my door, to beg the utility companies to not shut off those necessary services. But I have been there, no question. Growing up working class town poor, the only difference on the economic question was that it was all poor whites unlike today’s crowd. Also for many years living from hand to mouth before things got steady. I did not like it then and I do not like the idea of it now.  I am here to say even the “Fight for $15” is not enough, but it is a start. And I whole-heartedly support the struggle of my sisters and brothers for a little economic justice in this wicked old world. And any reader who might read this-would you work for these slave wages? I think not. So show your solidarity and get out and support the fast-food and Wal-Mart workers in their just struggles.