[SocialistWorker.org] A call to unite and fight the far-right menace

[SocialistWorker.org] A call to unite and fight the far-right menace

A call to unite and fight the far-right menace

The International Socialist Organization calls on the left to come together to confront the upsurge in fascist violence and stop this new movement before it gains more power.
November 7, 2018
THE HORROR of the slaughter of Jews in a Pittsburgh synagogue has once again highlighted a lesson of the 20th century: Fascism is an existential threat to the working class. It targets the oppressed and persecuted minorities with the overall goal of the decimation of working class movements and the left. It grows through terror and violence. But history shows us that it is possible to stop this spread of organized violence and hate through the mobilization of a mass opposition.
That is why the International Socialist Organization calls for a new, anti-fascist united front to confront, demobilize and discredit the growing far right in this country and around the world.
The urgency of such an effort is clear. In the U.S., we face an organized, violent fascist threat alongside state repression of the poor and vulnerable, with police shootings of African Americans and violence commonplace across the U.S. 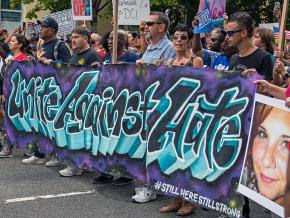 Get e-mail alerts from SocialistWorker.org

A call to unite and fight the far-right menace
print print reply reply
Follow Us
Published by the International Socialist Organization.
Material on this Web site is licensed by SocialistWorker.org, under a Creative Commons (by-nc-nd 3.0) license, except for articles that are republished with permission. Readers are welcome to share and use material belonging to this site for non-commercial purposes, as long as they are attributed to the author and SocialistWorker.org.