Pretrial hearing ends with a closed session. The government wants to call a witness that the defense says is both irrelevant and prejudicial. But the government doesn’t believe the defense should be allowed to interview him before he testifies.
By Nathan Fuller, Bradley Manning Support Network. March 1, 2013. 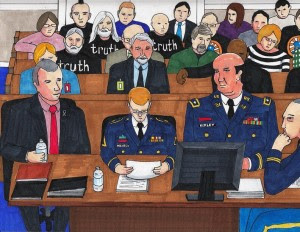 Bradley Manning reading his plea statement in court, sketched by Clark Stoeckley of the Bradley Manning Support Network.
This week’s pretrial hearing for PFC Bradley Manning has ended, at least for the press and public. The court moved to another closed session after about an hour of open-court litigation over elements of the “aiding the enemy” charge.
Prosecutors want to introduce evidence from the May 1, 2011, raid on Osama bin Laden’s compound in Pakistan to prove its charge that Bradley “aided the enemy.” They say bin Laden requested national defense information found on WikiLeaks’ website and that an Al Qaeda member responded with cables he found. They argue this is proof that America’s enemies “received” the unauthorized transmission from Bradley Manning, through WikiLeaks.
The defense opposes the move, because ‘receipt’ is not a required element of the charge (UCMJ Article 104). Rather, defense lawyer David Coombs said, the offense is committed as soon as the communication issues from the accused.
Though this may appear an effort to lower the burden of proof for the government, because it removes an element that prosecutors would have to prove, the defense opposed the evidence because it’s irrelevant and prejudicial. Coombs says that prosecutors are using bin Laden’s name in a politically charged effort to implicitly malign Bradley’s character. As he observes, the government charged Bradley with “aiding the enemy” on March 1, 2011 — two full months before the Abbottabad raid even occurred.
If the judge rules against the defense, the government wants to call a classified witness referred to as ‘John Doe.’ Prosecutors say ‘John Doe’ retrieved digital media from bin Laden’s compound, and many speculate that he’s a member Navy Seal Team 6.
The Secretary of Defense has invoked a privilege on ‘John Doe,’ which means that his identity and other elements of his prospective testimony are classified or are to remain concealed. The prosecution contends this privilege means that the defense shouldn’t be allowed to interview the witness before he testifies.
But invoking a privilege doesn’t negate Bradley’s 6th Amendment right to talk to a witness, Coombs says.
The defense could learn plenty of relevant information without eliciting classified information – for example, whether ‘John Doe’ has had memory issues, or has relevant biases, or has made inconsistent statements that would undercut his credibility.
Coombs also said the defense should be allowed to ask about the digital media allegedly found at the raid: where were they located, how were they found, what their condition was, whether he was the only person who collected them, and whether he decided to collect some and not other information. Hypothetically, Coombs said, “John Doe” could’ve found the media at the bottom of a trashcan. These are the types of things he could determine in an interview before testimony. Coombs agreed to speak to the witness telephonically if he was allowed to testify, to protect his identity.
The government says there are still classified facts regarding the raid – in response, Coombs observed that books have been written and a movie has been made about the raid. The prosecution’s exasperated Ashden Fein said the books and movie were made by private citizens, not the government.
Once again this week, litigation became too difficult to proceed in open court, as the government wanted to make arguments that required discussing, if not divulging, classified information. Judge Denise Lind moved to a closed session and adjourned the court to the press and public until Bradley’s next hearing, April 10-12.
Posted by american left history at 4:17 PM