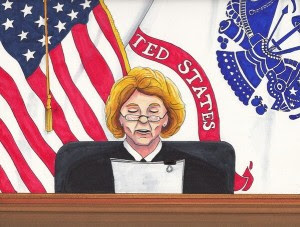 Judge Denise Lind. Sketch by Clark Stoeckley, Bradley Manning Support Network.
A pretrial hearing for PFC Bradley Manning at Fort Meade, MD, ended early for the press and public today, as the court moved to a closed session in the afternoon to litigate how to handle classified information during trial. Prosecutors intend to call 141 witnesses during the trial, and they expect testimony from 73 of those to include classified information.
The defense proposes to substitute, redact, or summarize the classified material, or to use code words to refer to secret names, dates, or places. But the government argues that 33 of its witnesses will discuss material too complex to be summarized or referred to by code, and it requests closing the sessions for those portions of their testimony. Judge Denise Lind challenged that assertion, agreeing with the defense that she needs to know more about what the witnesses will discuss before deciding to close future sessions.
Judge Lind continued to argue for keeping the courtroom open as much as possible during trial, saying the parties should exhaust all alternative methods before closing sessions. She asked for just one of the government’s witnesses to come to a pretrial hearing, to give a test run that would inform how to handle the remainder of the witnesses at trial. The government objected to this, but said it’d submit a formal response to the judge’s request later.
When it became clear that litigation couldn’t continue without more information, Judge Lind ordered a closed session for after lunch, so the government could privately explain to the defense and judge in more detail what it expects witnesses to divulge. The parties could then explore potential alternatives to closing the court during trial.
Prosecutors said they might be able to remove witnesses from their list after discussion of Bradley Manning’s plea, depending on what’s revealed. Tomorrow, Bradley and Judge Lind will have a ‘colloquy,’ or a discussion in which she asks him questions about the plea he’s offering and issues surrounding it.
The plea gives Bradley an opportunity to take responsibility for releasing some documents to WikiLeaks while opposing the way that the government has charged him. He submitted a statement supplementing the plea to Judge Lind, we learned yesterday. The colloquy gives him a chance to explain some of his reasoning at greater length. For instance, his statement to the court is said to explain that Bradley hoped that the Iraq War Logs release would ‘spark a domestic debate on the role of our military and foreign policy in general.’
Defense witnesses and evidence regarding over-classification
Judge Lind largely granted a government motion that prevents PFC Bradley Manning’s defense from calling witnesses to testify regarding U.S. over-classification. The defense wants to call witnesses who could explain that some of the documents Bradley is accused of releasing could not be reasonably expected to incur harm to the U.S. The defense says the witnesses could discuss rampant over-classification – i.e. needlessly making documents secret (which the Support Network wrote about in January 2012) – to give context for Bradley’s state of mind at the time of the disclosures.
But the judge did say she’d take judicial notice of two of the defense’s proposed adjudicative facts. She took notice of the fact that Congress made findings in section two of the Reducing Over-Classification Act (though not of the act itself). Therein, Congress found that the so-called 9/11 Commission determined that “security requirements nurture over-classification and excessive compartmentation of information among agencies.”
Furthermore, Congress said,


“The 9/11 Commission and others have observed that the over-classification of information interferes with accurate, actionable, and timely information sharing, increases the cost of information security, and needlessly limits stakeholder and public access to information.”

Judge Lind also said that she would take notice of statements from J. William Leonard, director of the Information Security Oversight Office, if proven relevant. For example, Leonard has discussed findings of an ISOO study, concluding that only 64% of documents they studied were properly classified.
Even though many of the defense’s witnesses weren’t accepted, these judicially noticed facts can help the defense prove that Bradley knew that over-classification was a serious problem in the military and that releasing the documents he did would not harm the U.S.
Some court documents are finally available
The biggest news of the day may have come from outside the proceedings, as the Department of Defense announced that it’s made 84 judicial orders and rulings in Bradley Manning’s court martial publicly available online, and will continue to release filings. The release comes after over a year of protest from journalists and activists demanding access to basic court documents. Reporters and lawyers have said Bradley’s proceedings have had less press access than secretive military tribunals at Guantanamo Bay. Journalists covering the case have long complained that the lack of public filings makes covering the case extremely difficult, not least because Judge Lind reads her lengthy rulings too quickly to transcribe.
The move may be an effort to circumvent the lawsuit levied by the Center for Constitutional Rights seeking public access to the documents. When Judge Lind rejected that, the CCR appealed to the Court of Appeals of the Armed Forces for a First Amendment ruling that would ensure press access to filings in all U.S. courts martial. The appeals court has yet to rule on the CCR’s suit.
The Support Network has previously pressured the military to make documents public when Judge Lind refused to. In October, hundreds of supporters flooded Fort Meade’s public affairs office phone lines with calls for an open trial.
Still, the vast majority of the 30,000 pages in Bradley’s case remain unavailable. The Washington Post’s Julie Tate called the DoD’s announcement “an important symbolic step toward long-awaited transparency in the case.” Speaking to the Guardian, the CCR’s president emeritus Michael Ratner criticized the DoD for releasing only a tiny portion of the legal filings.
Posted by american left history at 5:48 PM