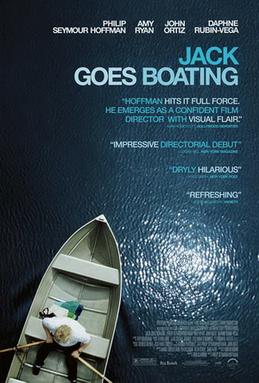 Damn Philip Seymour for letting “boy,” you know heroin get to him. That was my immediate reaction after viewing, no, my immediate reaction after about two minutes of the film under review Jack Goes Boating. A beautiful talent that gave us an Oscar performance in the difficult and tricky Capote (not letting his performance get in the way of the story line from Capote’s In Cold Blood )and a rip roaring one in Pirate Radio  among others goes to the mat, goes mano y mano with himself one more here explaining what the first sentence above was my immediate reaction. I don’t know if his paramour in the film Connie, played by Amy Ryan was right in saying Jack, the character Hoffman played was sexy but his presence was felt throughout the film even in moments of utter silence. Maybe particularly in those moments. And his deft directorial hand as well as he lets the four main characters go through their paces.

The headline here tells the story-ordinary people trying to make their places in the sun in hard-bitten New York with all the humor, horror, pathos, and bathos that gilded town lays on its denizens and have them still survive. The film based on the successful play centers on the up and down relationship between two guys, Jack and Clyde played by John Ortiz, who work as chauffeurs for Jack’s uncle. Jack is letting the world go by mostly but Clyde has aspirations and is in a up and down relationship with his wife Lucy, played by Daphne Rubin-Vega, which before the film is over is in Connie’s words not where she and Jack should go. Connie enters the picture because whatever their personal differences Clyde and Lucy want to set Jack up with her. Neither Jack nor Connie are Type A’s and might not have met if left to their own devices but as the film progresses all of a sudden you can sense that they will cling to each other for dear life.

The beauty of the story is that budding relationship where Jack, once he is smitten by Connie, is willing to move mountains to get next to her. Well maybe not mountains but was willing to learn how to swim in order to take Connie at her wish boating come New York summer with Clyde’s guidance (Jack a non-swimmer like lots of urban folk who never got around to it in their youth just like they don’t get driver’s licenses or learn to ride a bicycle). Willing to learn how to cook as well beyond cooking rather than starving from a top chef who was once, maybe still was Lucy’s lover a situation which caused plenty of heat between Lucy and Clyde as Jack and Connie were heading the other way. Heading the other way despite a dope-filled debacle of a dinner. This one was riveting like I said from minute two. Yeah, damn Philip Seymour and his “boy” problem.
Posted by american left history at 11:40 AM