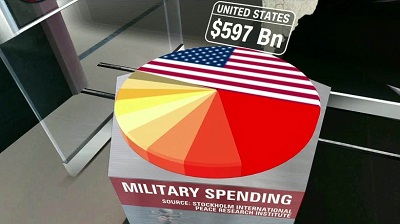 Trump’s misdirected White House is putting military profiteering before public needs and putting future generations at risk. Trump’s proposed budget would slash social services that we depend on to raise the military budget by 10%. The United States already spends more on its military than the next 7 countries combined." Sign the United for Peace and Justice petition to call for funds to be spent on human needs here at home, not military and war-making abroad.
Sign the petition! Tell Democrats and Republicans in Congress that we value and support a system that prioritizes public needs over wars and corporate profiteers.
Sign the petition!
Posted by american left history at 5:41 PM

Email ThisBlogThis!Share to TwitterShare to FacebookShare to Pinterest
Labels: Veterans For Peace