Members of Veterans For Peace have joined in solidarity with thousands of people who have traveled to Standing Rock, North Dakota to stand with our Indigenous sisters and brothers in opposing the construction of an oil pipeline by the Dakota Access company that threatens drinking water and sacred burial grounds. Veterans For Peace will continue to support this effort. As veterans, we see the connections between greed, racism, violence and environmental destruction in our own communities, and war and militarism abroad. We strive to achieve "Peace at Home and Peace Abroad” as a lens through which we view our mission.

If you are a Veterans For Peace member, please upload your pictures to our VFP at Standing Rock shared album!

Just a few days ago the Trump Administration and the Army moved to approve the easement for Energy Transfer Partners to drill under Lake Oahe on the Missouri River and build the Dakota Access Pipeline through Native land at Standing Rock, despite threats to the environment and the likely contamination of drinking water for millions of people living near the Missouri River. They also suspended a 14-day waiting period which means that the drilling could already be starting.
Leaders at Standing Rock are calling for solidarity actions around the country and around the globe to protest the recent order and for a large demonstration on Washington on March 10. Here's how you can take action, today! 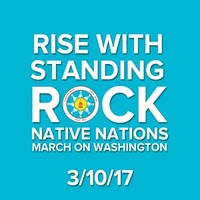 The Standing Rock Sioux Tribe and Indigenous grassroots leaders call on our allies across the United States and around the world to peacefully March on Washington DC. We ask that you rise in solidarity with the Indigenous peoples of the world whose rights protect Unci Maka (Grandmother Earth) for the future generations of all.
Standing Rock and Native Nations will lead a march in prayer and action in Washington D.C. on March 10th 2017.
See the Call to Action and the Demands
If you are planning on going to Standing Rock or the March on Washington, please let us know by filling out this form.
Contact: Brian Trautman, 518-390-8250, trautman@veteransforpeace.org