For Immediate Release
Contact: Pat Scanlon, Office: 978-475-1776, Cell: 978-590-4248, email:Vets4PeaceChapter9@gmail.com
Attached: Press Release, Parade Flyer, Open Letter to Residents of Boston
Mayor Walsh and Representative Steven Lynch
Officially Invited to Walk in the
Saint Patrick’s Peace Parade
Boston, Mass. – March 12, 2014 – Organizers of the Saint Patrick’s Peace Parade announced today that Mayor Marty Walsh and Representative Steven Lynch have been cordially invited to walk in the only parade on the streets of Boston on March 16 that is open, welcoming and inclusive of all groups whether they are veterans or non-veterans, gay or straight, black or white.
Mayor Walsh attempted to negotiate a suitable agreement with the Allied War Veterans Council to allow MassEquality to openly walk in the traditional parade. As has been widely reported those negotiations have fallen apart because of the intransience and continued exclusionary and discriminatory practices of the organizers of the traditional parade. The Mayor has publically stated that he will not walk in the first parade if MassEquality does not walk. MassEquality is not walking.
“Ones sexual orientation simply does not matter” stated Pat Scanlon, Coordinator of Veterans For Peace and the lead organizer for the second parade. “Our parade has eight divisions. One is the LGBT Division”. The other divisions are: Veterans For Peace, Peace, Religious, Environmental Stewardship, Political, Labor, Social and Economic Justice. “We welcome diversity”, stated Scanlon, “and invite all members of the LGBT community to come and join the second parade.  Both Mayor Walsh and Representative Lynch are welcome to join that division and truly show support for the LGBT community. It would be a significant statement for both of these politicians to walk under the rainbow flag”.
Since the breakdown of negotiations it appears as if both politicians are attempting to solicit one or more gay veterans to walk with them, crashing the party so to speak. “This appears to be more a desire to be in the first parade rather than actually supporting the LGBT community,” stated Reverend Lara Hoke, a Navy veteran, a lesbian and member of Veterans For Peace. “We understand the desire of both Mayor Walsh and Representative Lynch, who have walked in this parade for many years, to want to walk in the first parade” said Rev. Hoke.. “If MassEquality is not walking in that first parade openly with banners, signs, posters, songs and or clothing proclaiming who they are while celebrating Saint Patrick then Mayor should not walk either. The Mayor instead should join the inclusive and welcoming second parade, the Saint Patrick’s Peace Parade”. If Mayor de Blasio can walk in the alternative parade in New York City, Mayor Walsh can do the same in Boston”.
Participants in the Saint Patrick’s Peace Parade will assemble at 2:00 pm on West Broadway and D streets in South Boston on Sunday, March 16.
Web: smedleyvfp.org    Twitter: @smedleyVFP       Facebook: facebook.com/smedleyvfp
#### 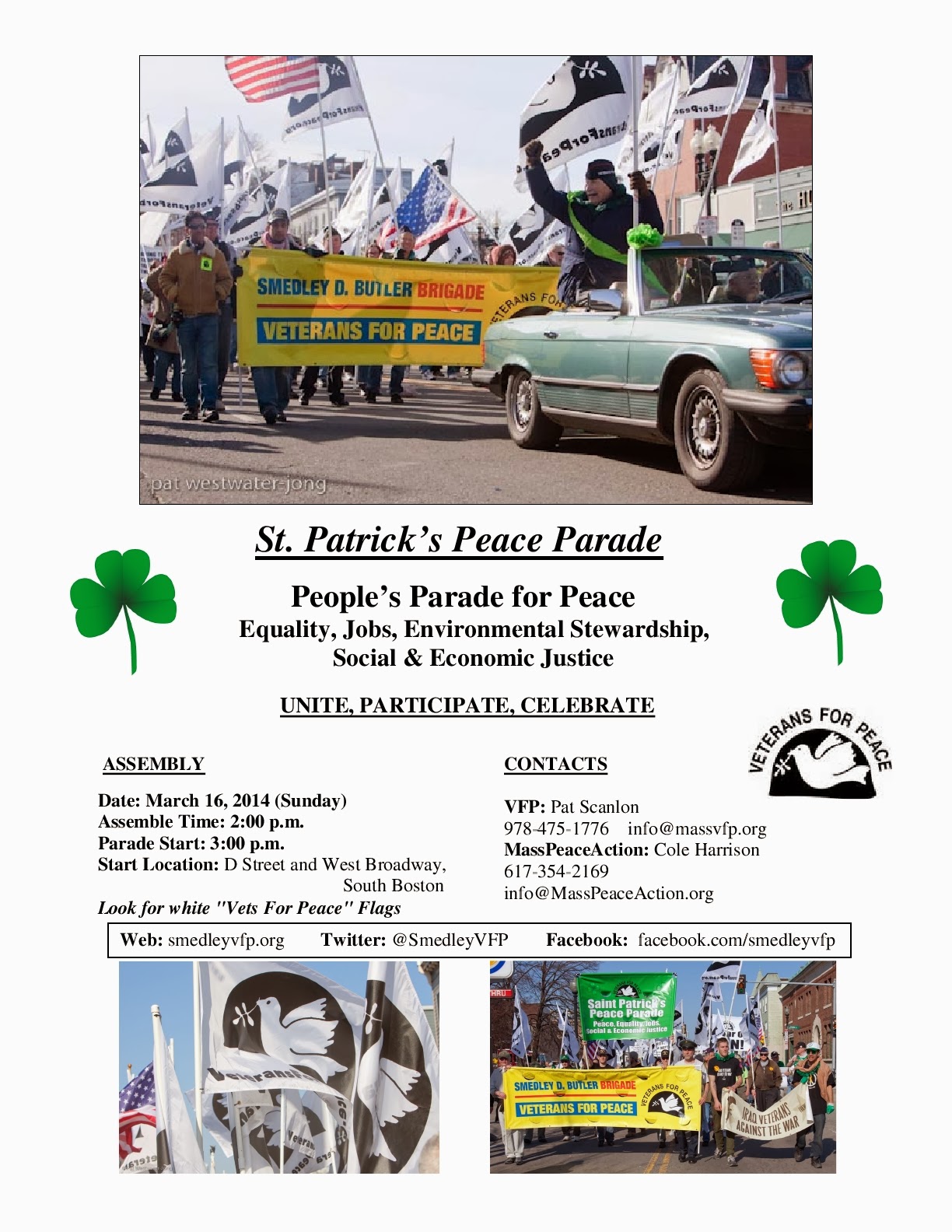 <*> To visit your group on the web, go to: http://groups.yahoo.com/group/smedleyvfp/
Posted by american left history at 4:51 PM