So I find this The Rag Blog website very useful to monitor for the latest in what is happening with past tense radical activists and activities. Anybody, with some kind of name, and who is still around from the 1960s has found a home here. The remembrances and recollections are helpful for today’s activists. Strangely the politics are almost non-existent, as least any that  would help today, except to kind of retroactively “bless” those old-time New Left politics that did nothing (well, almost nothing) but get us on the losing end of the class (and cultural) wars of the  last forty plus years. Still this is a must read blog for today’s left-wing militants.


I place some material in this space which may be of interest to the radical public that I do not necessarily agree with or support. Sometimes I will comment on my disagreements and sometimes I will just let the author/writer shoot him or herself in the foot without note. Off hand, as I have mentioned before in other contexts, I think it would be easier, infinitely easier, to fight for the socialist revolution straight up than some of the “remedies” provided by the commentators in the entries on this website. But part of that struggle for the socialist revolution is to sort out the “real” stuff from the fluff as we struggle for that more just world that animates our efforts. Read on.
*******

Larry Ray :
A little bombing quiz for you

In the two photos below please identify which bombing was ordered by Bashar al-Assad and which one by Benjamin Netanyahu. 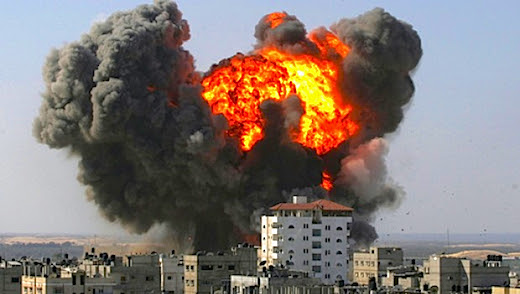 Still Winning Hearts and Minds.
By Larry Ray | The Rag Blog | July 30, 2014, 2014
There are two photos below and both are middle Eastern neighborhoods in different countries where families lived… husbands, wives, elderly relatives and lots of kids. Both neighborhoods were destroyed in a show of force by political leaders who called up ruthless and incessant shelling and bombing against civilians, all the while denying they were doing so.
These were political and tactical decisions to use deadly force to achieve total control of a populace… the old “bombing your way to peace” is still happening with a vengeance.
END_OF_DOCUMENT_TOKEN_TO_BE_REPLACED