So I find this The Rag Blog website very useful to monitor for the latest in what is happening with past tense radical activists and activities. Anybody, with some kind of name, and who is still around from the 1960s has found a home here. The remembrances and recollections are helpful for today’s activists. Strangely the politics are almost non-existent, as least any that  would help today, except to kind of retroactively “bless” those old-time New Left politics that did nothing (well, almost nothing) but get us on the losing end of the class (and cultural) wars of the  last forty plus years. Still this is a must read blog for today’s left-wing militants.


I place some material in this space which may be of interest to the radical public that I do not necessarily agree with or support. Sometimes I will comment on my disagreements and sometimes I will just let the author/writer shoot him or herself in the foot without note. Off hand, as I have mentioned before in other contexts, I think it would be easier, infinitely easier, to fight for the socialist revolution straight up than some of the “remedies” provided by the commentators in the entries on this website. But part of that struggle for the socialist revolution is to sort out the “real” stuff from the fluff as we struggle for that more just world that animates our efforts. Read on.
*******


Jim Simons :
The 50-year lawyer: Defying the systems of power

I knew that what I would write would never be published by the ‘Bar Journal.’ So I happily write it for ‘The Rag Blog.’ Here I stand, though the road was not exactly what I expected. 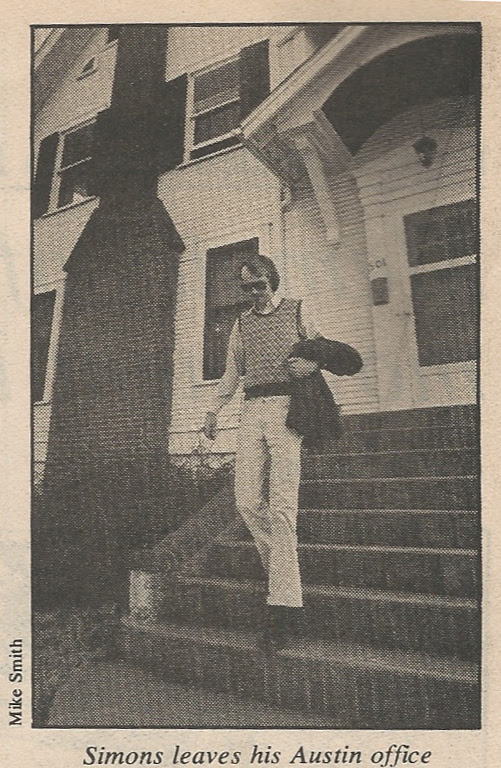 Lawyer Jim Simons at his Austin law office. Image from the Feb. 25, 1977 Texas Observer special issue on Texas lawyers. Jim wrote an article entitled, “Memoirs of a Movement Lawyer.”
By Jim Simons | The Rag Blog | July 30, 2014
AUSTIN — In 1964 I was sworn in to practice law in the old Supreme Court Building just northwest of the Capitol. I had many notions of what I was in for. Some were just the stuff of bad dreams, some absurdly romantic or idealistic.
There was a still small voice that told me I did not want to do this. Lawyers were said to be stuffy and conservative. I knew I was not the latter and hoped I was not the former. I had deep-seated doubts about how I might fit in. I knew I was very much an outsider in law school. I had rebelled against the phony solemnity of the institution.
END_OF_DOCUMENT_TOKEN_TO_BE_REPLACED