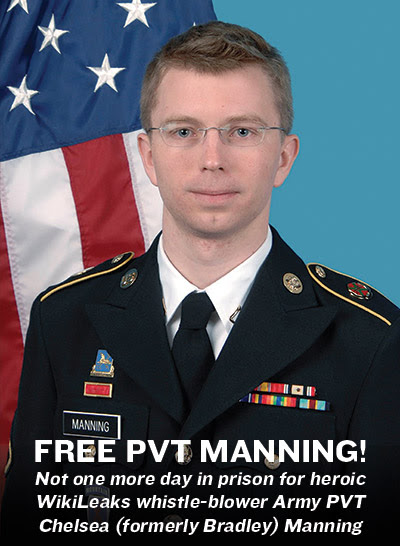 Note that this image is PVT Manning’s preferred photo.


You  can also call (Comments”202-456-1111), write The White House, 1600 Pennsylvania Avenue NW, Washington, DC 20500, e-mail-(http://www.whitehouse.gov’contact/submitquestions-and comments) to demand that President Obama use his constitutional power under Article II, Section II to pardon Private Manning now.
*Start a stand -out, weekly, bi-weekly, monthly, in your town square to publicize the pardon and clemency campaigns.  Contact the Private Manning SupportNetwork for help with materials and organizing tips http://www.bradleymanning.org/


*Contribute to the Private  Manning Defense Fund- now that the trial has finished funds are urgently needed for pardon campaign and for future military and civilian court appeals. The hard fact of the American legal system, military of civilian, is the more funds available the better the defense, especially in political prisoner cases like Private Manning’s. The government had unlimited financial and personnel resources to prosecute Private Manning at trial. And used them as it will on any future legal proceedings. So help out with whatever you can spare. For link go to http://www.bradleymanning.org/
*Write letters of solidarity to Private Manning while she is serving her sentence. She wishes to be addressed as Chelsea and have feminine pronouns used when referring to her. Private Manning’s mailing address: Chelsea E. Manning, 89289, 1300 N. Warehouse Road, Fort Leavenworth, Kansas 66027-2304.


Private Manning cannot receive stamps or money in any form. Photos must be on copy paper. Along with “contraband,” “inflammatory material” is not allowed. Six page maximum.

There is no question now that Chelsea Manning’s trial, if one can called what took place down in Fort Meade a trial in the summer of 2013 rather than a travesty, a year after her conviction on twenty plus counts and having received an outrageous thirty-five year sentence essentially for telling us the truth about American atrocities and nefarious actions in Iraq, Afghanistan and wherever else the American government can stick its nose that her case has dropped from view. Although she occasionally gets an Op/Ed opportunity, including in the New York Times, a newspaper which while recoiling at the severity of the sentence in the immediate reaction did not question the justice of the conviction, and has several legal moves going from action to get the necessary hormonal treatments reflecting her real sexual identity (which the Army has stonewalled on and which even the New York Times has called for implementing) to now preparing the first appeal of her conviction to another military tribunal the popular uproar against her imprisonment has become a hush. While the appeals process may produce some results, perhaps a reduction in sentence, the short way home for her is a presidential pardon right now. I urge everybody to Google Amnesty International and sign on to the online petition to put the pressure on President Barack Obama for clemency.

I attended some of the sessions of Chelsea Manning’s court-martial in the summer of 2013 and am often asked these days in speaking for her release about what she could expect from the various procedures going forward to try to “spring” her from the clutches of the American government, or as I say whenever I get the chance to “not leave our buddy behind” in the time-honored military parlance. I have usually answered depending on what stage her post-conviction case is in that her sentence was draconian by all standards for someone who did not, although they tried to pin this on her, “aid the enemy.” Certainly Judge Lind though she was being lenient with thirty-five years when the government wanted sixty (and originally much more before some of the counts were consolidated). The next step was to appeal, really now that I think about it, a pro forma appeal to the commanding general of the Washington, D.C. military district where the trial was held. There were plenty of grounds to reduce the sentence but General Buchanan backed up his trial judge in the winter of 2014. Leaving Chelsea supporters right now with only the prospect of a presidential pardon to fight for as the court appeals are put together which will take some time. This is how I put the matter at one meeting:

“No question since her trial, conviction, and draconian sentence of thirty-five years imposed by a vindictive American government heroic Wiki-leaks whistle-blower Chelsea Manning’s has fallen off the radar. The incessant news cycle which has a short life cycle covered her case sporadically, covered the verdict, covered the sentencing and with some snickers cover her announcement directly after the sentencing that she wanted to live as her true self, a woman. (A fact that her supporters were aware of prior to the announcement but agreed that the issue of her sexual identity should not get mixed up with her heroic actions during the pre-trial and trial periods.) Since then despite occasional public rallies and actions her case had tended, as most political prisoner cases do, to get caught up in the appeals process and that keeps it out of the limelight.”

Over the past year or so Chelsea Manning has been honored and remembered by the Veterans For Peace, Smedley Butler Brigade in Boston in such events as the VFP-led Saint Patrick’s Day Peace Parade, the Memorial Day anti-war observance, the yearly Gay Pride Parade, the Rockport July 4th parade, the VFP-led Veterans Day Peace Parade, and on December 17th her birthday. We have marched with a banner calling for her freedom, distribute literature about her case and call on one and all to sign the pardon petitions. The banner has drawn applause and return shouts of “Free Chelsea.” The Smedley Butler Brigade continues to stand behind our sister. We will not leave her behind. We also urge everybody to sign the Amnesty International on-line petition calling on President Obama to use his constitutional authority to pardon Chelsea Manning

Additional Markin comment on his reasons for supporting Chelsea Manning:

I got my start in working with anti-war GIs back in the early 1970s after my own military service was over. After my own service I had felt a compelling need to fight the monster from the outside after basically fruitless and difficult efforts inside once I got “religion” on the war issue first-hand. That work included helping create a couple of GI coffeehouses near Fort Devens in Massachusetts and down at Fort Dix in New Jersey in order for GIs to have a “friendly” space in which to think through what they wanted to do in relationship to the military.

Some wanted help to apply for the then tough to get discharge for conscientious objection. Tough because once inside the military, at least this was the way things went then, the military argued against the depth of the applying soldier’s convictions and tended to dismiss such applications out of hand. Only after a few civil court cases opened up the application process later when the courts ruled that the military was acting arbitrarily and capriciously in rejecting such applications out of hand did things open up a little in that channel. Others wanted to know their rights against what they were told by their officers and NCOs. But most, the great majority, many who had already served in hell-hole Vietnam, wanted a place, a non-military place, a non-GI club, where they could get away from the smell, taste, and macho talk of war.

Although there are still a few places where the remnants of coffeehouses exist like the classic Oleo Strut down at Fort Hood in Texas the wars of the past decade or so has produced no great GI resistance like against the Vietnam War when half the Army in America and Vietnam seemed to be in mutiny against their officers, against their ugly tasks of killing every “gook” who crossed their path for no known reason except hubris, and against the stifling of their rights as citizens. At one point no anti-war march was worthy of the name if it did not have a contingent of soldiers in uniform leading the thing. There are many reasons for this difference in attitude, mainly the kind of volunteer the military accepts but probably a greater factor is that back then was the dominance of the citizen-soldier, the draftee, in stirring things up, stirring things up inside as a reflection of what was going on out on the streets and on the campuses. I still firmly believe that in the final analysis you have to get to the “cannon fodder,” the grunts, the private soldier if you want to stop the incessant war machine. Since we are commemorating, if that is the right word the 100th anniversary of the start of World War I check out what happened, for example, on the Russian front when the desperate soldiers left the trenches during 1917 after they got fed up with the Czar, with the trenches, with the landlords, and the whole senseless mess.

Everyone who has the least bit of sympathy for the anti-war struggles of the past decade should admire what Chelsea Manning has done by her actions releasing that treasure trove of information about American atrocities in Iraq and elsewhere. She has certainly paid the price for her convictions with a draconian sentence. It is hard to judge how history will record any particular heroic action like hers but if the last real case with which her action can be compared with is a guide, Daniel Ellsberg and The Pentagon Papers, she should find an honored spot. Moreover Chelsea took her actions while in the military which has its own peculiar justice system. Her action, unlike back in Vietnam War times, when the Army was half in mutiny was one of precious few this time out. Now that I think about she does not have to worry about her honored place in history. It is already assured. But just to be on the safe side let’s fight like hell for her freedom. We will not leave our sister Chelsea behind.