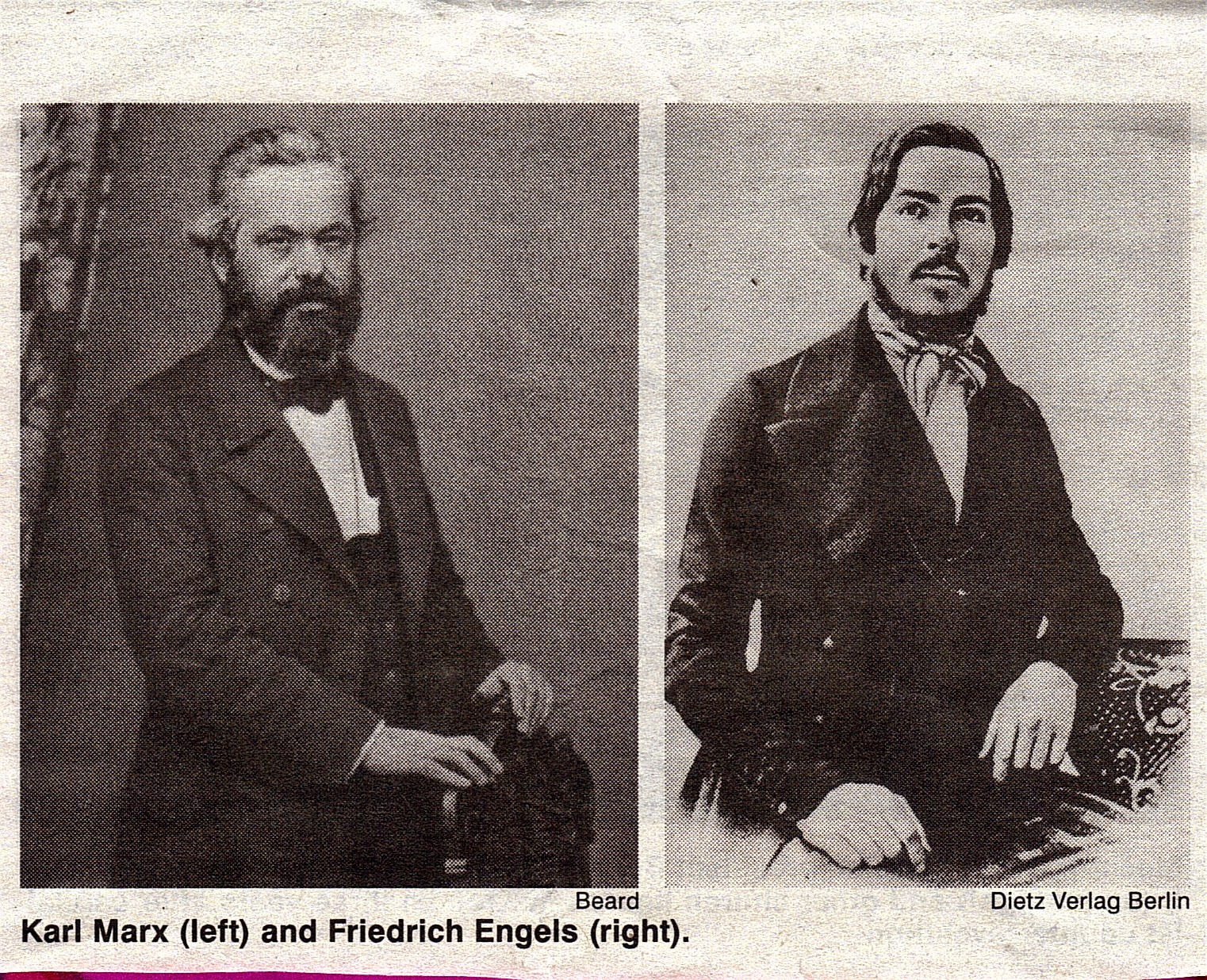 
I would not expect any average American citizen today to be familiar with the positions of the communist intellectuals and international working-class party organizers (First International) Karl Mark and Friedrich Engels on the events of the American Civil War. There is only so much one can expect of people to know off the top of their heads about what for several generations now has been ancient history.  I am, however, always amazed when I run into some younger leftists and socialists, or even older radicals who may have not read much Marx and Engels, and find that they are surprised, very surprised to see that Marx and Engels were avid partisans of the Abraham Lincoln-led Union side in the American Civil War. I, in the past, have placed a number of the Marx-Engels newspaper articles from the period in this space to show the avidity of their interest and partisanship in order to refresh some memories and enlighten others. As is my wont I like to supplement such efforts with little fictional sketches to illustrate points that I try to make and do so below with my take on a Union soldier from Boston, a rank and file soldier, Wilhelm Sorge.

Since Marx and Engels have always been identified with a strong anti-capitalist bias for the unknowing it may seem counter-intuitive that the two men would have such a positive position on events that had as one of its outcomes an expanding unified American capitalist state. A unified capitalist state which ultimately led the vanguard political and military actions against the followers of Marx and Engels in the 20th century in such places as Russia, China, Cuba and Vietnam. The pair were however driven in their views on revolutionary politics by a theory of historical materialism which placed support of any particular actions in the context of whether they drove the class struggle toward human emancipation forward. So while the task of a unified capitalist state was supportable alone on historical grounds in the United States of the 1860s (as was their qualified support for German unification later in the decade) the key to their support was the overthrow of the more backward slave labor system in one part of the country (aided by those who thrived on the results of that system like the Cotton Whigs in the North) in order to allow the new then progressive capitalist system to thrive.

In the age of advanced imperialist society today, of which the United States is currently the prime example, and villain, we find that we are, unlike Marx and Engels, almost always negative about capitalism’s role in world politics. And we are always harping on the need to overthrow the system in order to bring forth a new socialist reconstruction of society. Thus one could be excused for forgetting that at earlier points in history capitalism played a progressive role. A role that Marx, Engels, Lenin, Trotsky and other leading Marxists, if not applauded, then at least understood represented human progress. Of course, one does not expect everyone to be a historical materialist and therefore know that in the Marxist scheme of things both the struggle to bring America under a unitary state that would create a national capitalist market by virtue of a Union victory and the historically more important struggle to abolish slavery that turned out to be a necessary outcome of that Union struggle were progressive in the eyes of our forebears, and our eyes too.

Furthermore few know about the fact that the small number of Marxist supporters in the United States during that Civil period, and the greater German immigrant communities here that where spawned when radicals were force to flee Europe with the failure of the German revolutions of 1848 were mostly fervent supporters of the Union side in the conflict. Some of them called the “Red Republicans” and “Red 48ers” formed an early experienced military cadre in the then fledgling Union armies. Below is a short sketch drawn on the effect that these hardened foreign –born abolitionists had on some of the raw recruits who showed up in their regiments and brigades during those hard four years of fighting, the third year of which we are commemorating this month.

Address of the International Working Men's Association to Abraham Lincoln, President of the United States of America

We congratulate the American people upon your re-election by a large majority. If resistance to the Slave Power was the reserved watchword of your first election, the triumphant war cry of your re-election is Death to Slavery.

From the commencement of the titanic American strife the workingmen of Europe felt instinctively that the star-spangled banner carried the destiny of their class. The contest for the territories which opened the dire epopee, was it not to decide whether the virgin soil of immense tracts should be wedded to the labor of the emigrant or prostituted by the tramp of the slave driver?

When an oligarchy of 300,000 slaveholders dared to inscribe, for the first time in the annals of the world, "slavery" on the banner of Armed Revolt, when on the very spots where hardly a century ago the idea of one great Democratic Republic had first sprung up, whence the first Declaration of the Rights of Man was issued, and the first impulse given to the European revolution of the eighteenth century; when on those very spots counterrevolution, with systematic thoroughness, gloried in rescinding "the ideas entertained at the time of the formation of the old constitution", and maintained slavery to be "a beneficent institution", indeed, the old solution of the great problem of "the relation of capital to labor", and cynically proclaimed property in man "the cornerstone of the new edifice" — then the working classes of Europe understood at once, even before the fanatic partisanship of the upper classes for the Confederate gentry had given its dismal warning, that the slaveholders' rebellion was to sound the tocsin for a general holy crusade of property against labor, and that for the men of labor, with their hopes for the future, even their past conquests were at stake in that tremendous conflict on the other side of the Atlantic. Everywhere they bore therefore patiently the hardships imposed upon them by the cotton crisis, opposed enthusiastically the proslavery intervention of their betters — and, from most parts of Europe, contributed their quota of blood to the good cause.

While the workingmen, the true political powers of the North, allowed slavery to defile their own republic, while before the Negro, mastered and sold without his concurrence, they boasted it the highest prerogative of the white-skinned laborer to sell himself and choose his own master, they were unable to attain the true freedom of labor, or to support their European brethren in their struggle for emancipation; but this barrier to progress has been swept off by the red sea of civil war.

The workingmen of Europe feel sure that, as the American War of Independence initiated a new era of ascendancy for the middle class, so the American Antislavery War will do for the working classes. They consider it an earnest of the epoch to come that it fell to the lot of Abraham Lincoln, the single-minded son of the working class, to lead his country through the matchless struggle for the rescue of an enchained race and the reconstruction of a social world. [B]

Signed on behalf of the International Workingmen's Association, the Central Council:

[A] From the minutes of the Central (General) Council of the International — November 19, 1864:


"Dr. Marx then brought up the report of the subcommittee, also a draft of the address which had been drawn up for presentation to the people of America congratulating them on their having re-elected Abraham Lincoln as President. The address is as follows and was unanimously agreed to."


[B] The minutes of the meeting continue:


"A long discussion then took place as to the mode of presenting the address and the propriety of having a M.P. with the deputation; this was strongly opposed by many members, who said workingmen should rely on themselves and not seek for extraneous aid.... It was then proposed... and carried unanimously. The secretary correspond with the United States Minister asking to appoint a time for receiving the deputation, such deputation to consist of the members of the Central Council."

I am directed to inform you that the address of the Central Council of your Association, which was duly transmitted through this Legation to the President of the United [States], has been received by him.

So far as the sentiments expressed by it are personal, they are accepted by him with a sincere and anxious desire that he may be able to prove himself not unworthy of the confidence which has been recently extended to him by his fellow citizens and by so many of the friends of humanity and progress throughout the world.

The Government of the United States has a clear consciousness that its policy neither is nor could be reactionary, but at the same time it adheres to the course which it adopted at the beginning, of abstaining everywhere from propagandism and unlawful intervention. It strives to do equal and exact justice to all states and to all men and it relies upon the beneficial results of that effort for support at home and for respect and good will throughout the world.

Nations do not exist for themselves alone, but to promote the welfare and happiness of mankind by benevolent intercourse and example. It is in this relation that the United States regard their cause in the present conflict with slavery, maintaining insurgence as the cause of human nature, and they derive new encouragements to persevere from the testimony of the workingmen of Europe that the national attitude is favored with their enlightened approval and earnest sympathies.

I have the honor to be, sir, your obedient servant,