As The 100th Anniversary Of The First Year Of World War I (Remember The War To End All Wars) Continues ... Some Remembrances-Artists’ Corner-Gustav Klimt 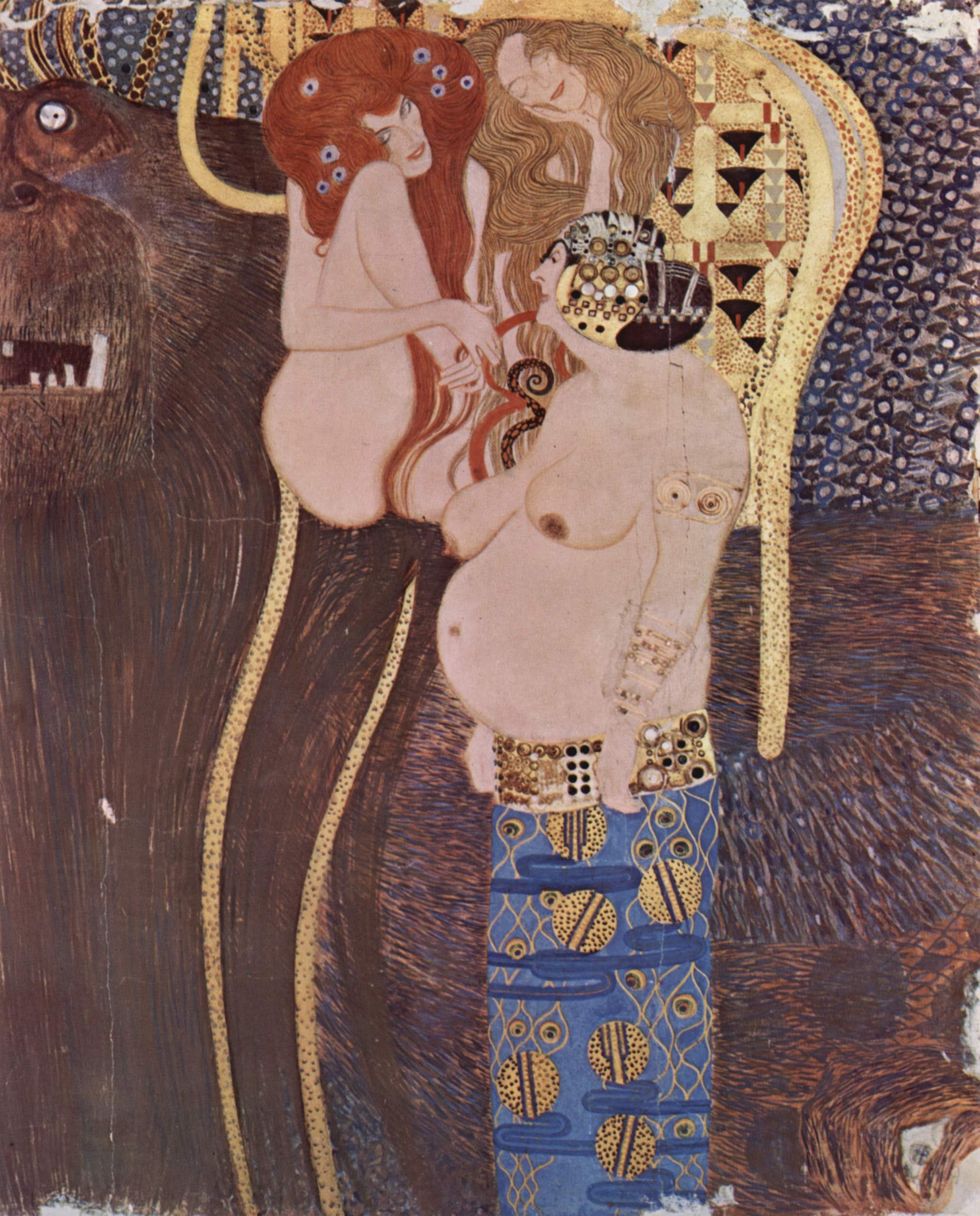 In say 1912, 1913, hell, even the beginning of 1914, the first few months anyway, before the war clouds got a full head of steam in the summer they all profusely professed their unmitigated horror at the thought of war, thought of the old way of doing business in the world. Yes the artists of every school the Cubist/Fauvists/Futurists/Constructivists, Surrealists or those who would come to speak for those movements (hell even the Academy spoke the pious words when there was sunny weather), those who saw the disjointedness of modern industrial society and put the pieces to paint, sculptors who put twisted pieces of metal juxtaposed to each other saw that building a mighty machine from which you had to run created many problems; writers of serious history books proving that, according to their Whiggish theory of progress,  humankind had moved beyond war as an instrument of policy and the diplomats and high and mighty would put the brakes on in time, not realizing that they were all squabbling cousins; writers of serious and not so serious novels drenched in platitudes and hidden gazebo love affairs put paid to that notion in their sweet nothing words that man and woman had too much to do, too much sex to harness to denigrate themselves by crying the warrior’s cry and by having half-virgin, neat trick, maidens strewing flowers on the bloodlust streets; musicians whose muse spoke of delicate tempos and sweet muted violin concertos, not the stress and strife of the tattoos of war marches with their tinny conceits; and poets, ah, those constricted poets who bleed the moon of its amber swearing, swearing on a stack of seven sealed bibles, that they would go to the hells before touching the hair of another man, putting another man to ground or lying their own heads down for some imperial mission. They all professed loudly (and those few who did not profess, could not profess because they were happily getting their blood rising, kept their own consul until the summer), that come the war drums they would resist the siren call, would stick to their Whiggish, Futurist, Constructionist, Cubist worlds and blast the war-makers to hell in quotes, words, chords, clanged metal, and pretty pastels. They would stay the course.


And then the war drums intensified, the people, their clients, patrons and buyers, cried out their lusts and they, they made of ordinary human clay as it turned out, poets, beautiful poets like Wilfred Owens who would sicken of war before he passed leaving a beautiful damnation on war, its psychoses, and broken bones and dreams, and the idiots who brought humankind to such a fate, like e. e. cummings who drove through sheer hell in those rickety ambulances floors sprayed with blood, man blood, angers, anguishes and more sets of broken bones, and broken dreams, like Rupert Brooke all manly and old school give and go, as they marched in formation leaving the ports and then mowed down like freshly mown grass in their thousands as the charge call came and they rested, a lot of them, in those freshly mown grasses, like Robert Graves all grave all sputtering in his words confused about what had happened, suppressing, always suppressing that instinct to cry out against the hatred night, like old school, old Thomas Hardy writing beautiful old English pastoral sentiments before the war and then full-blown into imperium’s service, no questions asked old England right or wrong, like old stuffed shirt himself T.S. Eliot speaking of hollow loves, hollow men, wastelands, and such in the high club rooms on the home front, and like old brother Yeats speaking of terrible beauties born in the colonies and maybe at the home front too as long as Eliot does not miss his high tea. Jesus what a blasted night that Great War time was.


And do not forget when the war drums intensified, and the people, their clients, patrons and buyers, cried out their lusts and they, they, other creative souls made of ordinary human clay as it turned out


And then the war drums intensified, the people, their clients, patrons and buyers, cried out their lusts and they, they made of ordinary human clay as it turned out, artists, beautiful artists like Fernand Leger who could no longer push the envelope of representative art because it had been twisted by the rubble of war, by the crashing big guns, by the hubris of commanders and commanded and he turned to new form, tubes, cubes, prisms, anything but battered humankind in its every rusts and lusts, all bright and intersecting once he got the mustard gas out of his system, once he had done his patria duty, like speaking of mustard gas old worn out John Singer Sargent of the three name WASPs forgetting Boston Brahmin society ladies in decollage, forgetting ancient world religious murals hanging atop Boston museum and spewing trench warfare and the blind leading the blind out of no man’s land, out of the devil’s claws, like Umberto Boccioni, all swirls, curves, dashes, and dangling guns as the endless charges endlessly charge, like Gustav Klimt and his endlessly detailed gold dust opulent Asiatic dreams filled with lovely matrons and high symbolism and blessed Eve women to fill the night, Adam’s night after they fled the garden, like Joan Miro and his infernal boxes, circles, spats, eyes, dibs, dabs, vaginas, and blots forever suspended in deep space for a candid world to fret through, fret through a long career, and like poor maddened rising like a phoenix in the Spartacist uprising George Grosz puncturing the nasty bourgeoisie, the big bourgeoisie the ones with the real dough and their overfed dreams stuffed with sausage, and from the bloated military and their fat-assed generals stuff with howitzers and rocket shells, like Picasso, yeah, Picasso taking the shape out of recognized human existence and reconfiguring the forms, the mesh of form to fit the new hard order, like, Braque, if only because if you put the yolk on Picasso you have to tie him to the tether too.


And do not forget when the war drums intensified, and the people, their clients, patrons and buyers, cried out their lusts and they, they, other creative souls made of ordinary human clay as it turned out sculptors, writers, serious and not, musicians went to the trenches to die deathless deaths in their thousands for, well, for humankind, of course, their always fate ….
Posted by american left history at 5:42 PM