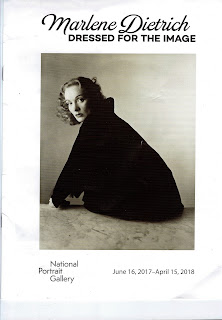 [Normally a great if sullied* director like Sir Alfred Hitchcock would be cited in the headline but since this review links tangentially two aspects of Marlene Dietrich’s career she gets top billing.

* “Sullied” since earlier this year, 2017, during the height of the sexual harassment and sexual crimes by high level powerful Hollywood men and later others in high positions it was revealed by Tippi Hendron who most famously starred in the Hitchcock classic The Birds that he had incessantly sexually harassed her and moreover ruined her career after she had rebuffed him. Greg Green]
******

Sometimes I can’t figure out the how or why of our new site manager Greg Green’s madness in making assignments. Or in the case here linking two different pieces of work only tangentially related together. Here’s what I mean. A few months ago when I was first hired on by Greg to bring in younger writers and give them decent assignments I happened to be headed to Washington, D.C. on other business when he asked me to stop off at the National Gallery of Art on the National Mall and view and review the big Vermeer and friends exhibit (not the official museum title but that is what it is about) of 16th and 17th Dutch and Flemish art. (That “younger writers” deserves some additional comment since I am a little older at twenty-eight than the youngest writer Kenny Jacobs but almost two decades younger that what under the old regime, sorry I can’t mention his name under an agreement that we would not do so with Greg, were considered young writers against the old guard who have hovered around since the 1960s-and apparently never got over it-the 1960s that is.)

I did as asked so and did what I thought was a good review given that I didn’t know a damn thing about the subject. The subject of Dutch and Flemish painting which mostly seemed boring and repetitious around family portraits and infinite scenes of fruits, vegetables and game not art in general where my tastes run to the Abstract Expressionists who I don’t know much about either but appeal to my eye. Expressed my like/dislike views and left it at that. I did make a mistake in citing another writer here, an old-timer, Frank Jackman, and his quasi –Marxist views on art and we went back and forth about it as he earnestly tried to “teach” me about this ancient painters and their “milieu,” Frank’s word. You can read that exchange elsewhere under the archival title When Capitalist Was Young….

That was all well and good. What I had also done on that trip as well was sneak after my business was over to the National Portrait Gallery since it stays open until seven to view some American art that I was interested in when I noticed that there was a photographic display on the career of well-known (and much “drag queen”- imitated) German turned American citizen actress Marlene Dietrich. I thereafter mentioned that exhibit in passing to Greg who must have put that fact in the back of his mind because when he had finished previewing the film under review Stage Fright a thriller by director Alfred Hitchcock starring Ms. Dietrich he cornered me by the water cooler and gave me the assignment. Again I knew nada about Ms. Dietrich other than what I had read at the exhibit not being either a fan of Mr. Hitchcock, hers, or of old time movies. So here it is as good as I can make it without much experience with this kind of film.

Marlene Dietrich had a certain style about her, a certain independent don’t give a damn attitude which permeated her role as Charlotte Inkwood, a chanteuse and actress who had both a lover, Johnny, played Richard Todd and a husband she did not much like, wanted to see dead. So, yes, didn’t like much is right if understated like her role here.     That is the drift of the storyline, with that not “much like” unseen husband lying on the living room floor. The first twist and turn of the film which drives it in a certain direction revolved around the very clear implication that Charlotte had done the deed. It sure looked like it as every emotive breath she took when she told lover-boy Johnny about it kept saying guilty as hell. Also in her apparent duplicity looked like she had used Johnny to cover her tracks and make him the fall guy.

Enter Eve, played by Jane Wyman, a friend of Johnny’s who thought she was in love with him and did everything she could to hide him and who was bewitched by his story that Charlotte had done the deed. Including producing a telltale and fatal bloodstained dress she had allegedly worn to do the deed. By hook or by crook to save darling Johnny Eve directly confronted Charlotte via a ruse as her temporary dresser, an institution in the theater world. Enter Detective Smith, played by Michael Wilding, who turns Eve’s head away romantically from Johnny who made it very clear that he had gone over the edge for Charlotte.

Meanwhile this Smith and his fellow police officers are looking high and low for Johnny boy. Not getting anyway especially since Eve, and her family, not suspecting anything untoward of him were keeping him a step or two ahead of the law. With his help. As things moved toward a climax, toward the capture of on the run Johnny it was revealed via another ruse by the coppers that Johnny, under Charlotte’s cunning bidding had actually killed dear sweet Mr. Inkwood. This revelation occurred while both he and Eve are hiding under the stage of the theater that Charlotte played at. Oh no, Eve was a goner. Not so fast since the clever Ms. Eve was able to put herself out of danger and old Johnny got his just desserts. Of course Charlotte will get hers as well taking as Sandy Salmon says quoting Sam Lowell the big step-off.

I don’t know if this is a big time Dietrich work although she certainly could emote when the deal went down, could act whatever she needed to act to stay out of the clutches of the law. Perhaps know it all Frank Jackman will give me the same working over he gave me on those freaking Dutch and Flemish painters who grabbed up the great art when they ruled the roost and “teach” me what is what about the legacy of Ms. Dietrich.
Posted by american left history at 11:49 AM