“And The Choir Kept Singing Of Freedom”- Birmingham Sunday-1963-A Reflection After Viewing "Dawoud Bey: The Birmingham Project"Photograph Display At The National Gallery Of Art

“And The Choir Kept Singing Of Freedom”- Birmingham Sunday-1963-A Reflection After Viewing "Dawoud Bey: The Birmingham Project"Photograph Display At The National Gallery Of Art 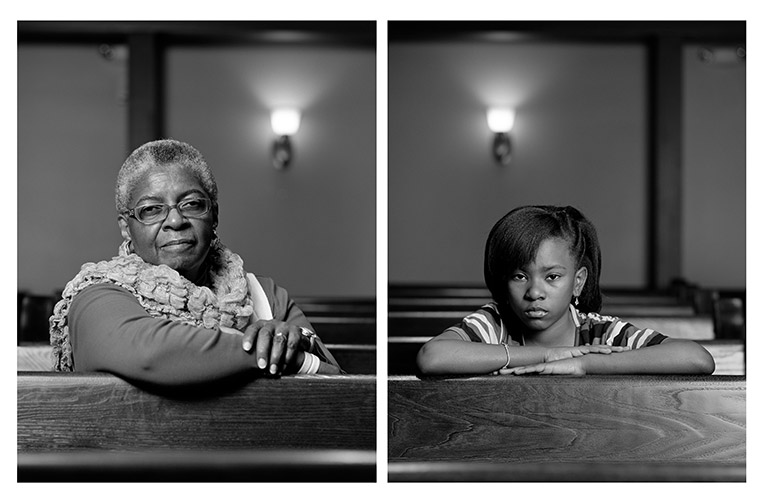 Dawoud Bey, Mary Parker and Caela Cowan, 2012, 2 inkjet prints mounted to dibond, overall: 101.6 x 162.56 cm (40 x 64 in.), National Gallery of Art, Washington, Gift of the Collectors Committee and the Alfred H. Moses and Fern M. Schad Fund
For more than 40 years photographer Dawoud Bey (b. 1953) has portrayed American youth and those from marginalized communities with sensitivity and complexity. Dawoud Bey: The Birmingham Project marks the National Gallery of Art's recent acquisition of four large-scale photographs and one video from Bey's series, The Birmingham Project, a tribute to the victims of the 16th Street Baptist Church bombing in Birmingham, Alabama. Coinciding with the 55th anniversary of this tragedy, the exhibition focuses on how Bey visualizes the past through the lens of the present, pushing the boundaries of portraiture and engaging ongoing national issues of racism, violence against African Americans, and terrorism in churches.
On September 15, 1963, four girls were killed in the dynamiting of the church, and two teenaged boys were murdered in racially motivated violence. Each of Bey’s diptychs combines one portrait of a young person the same age as one of the victims, and another of an adult 50 years older—the child's age had she or he survived. Alongside these photographs, the exhibition features Bey's video 9.15.63. This split-screen projection juxtaposes a re-creation of the drive to the 16th Street Baptist Church, taken from the vantage point of a young child in the backseat, with slow pans that move through everyday spaces (beauty parlor, barbershop, lunch counter, and schoolroom) as they might have appeared that Sunday morning. Devoid of people, these views poeticize the innocent lives ripped apart by violence.
This exhibition is curated by Kara Fiedorek, Andrew W. Mellon Postdoctoral Curatorial Fellow in the department of photographs, National Gallery of Art, Washington.
By Seth Garth

Sometimes things, events, ideas, and such lead into one another. Recently I had written a short piece based on hearing a segment on NPR’s Morning Edition where the reporter was ruminating about the effect that folk-singer/songwriter Bob Dylan’s “anthem” The Times They Are A-Changin’ had on her and the Generation of ‘68 when it first hit the airwaves in 1963. That reportage got my attention since I have spent plenty of cyber-ink throughout my journalistic career highlighting various aspects of the tremendous push on my generation, that Generation of ’68 or the best part of it, of events in the early 1960s which were harbingers of what we expected to have occur that would change the world, would turn the world upside down. I thus need not go into detail here about my notion that Bob Dylan’s song set him up as the “voice” of a generation whether he wanted to be that or not. Nor about what effect that song, and songs like his had on us, gave us our marching orders.
As part of her presentation the reporter mentioned that some events, some events down South around the black civil rights movement against one Mister James Crow like the beatings, the water-hosing and the unleashing of the vicious dogs by the police on innocent protestors had on her growing political consciousness, her desire to work for social change. Although she did not specifically mention Birmingham Sunday, the bombing of a black church killing four innocent children and wounding others that event triggered the activism button of many young people, including myself.

I have detailed elsewhere some of the events like the black civil rights struggle down South, the fight for nuclear bomb disarmament, the emerging struggle against the escalating Vietnam War as acting as catalysts to action. Also tried to convey a more general sense of the mood of the times among young people that the world, a world then on the brink, on as one song had it on the “eve of destruction” was not responding to their needs, was not changing in ways that we could understand. Most of all that we had no say, had not been asked about what had been created in our names. And nobody in power seemed to think that they needed to consult us.
All of this came to mind as well by a recent visit to the National Gallery of Art in Washington, D.C. where on the ground floor there was a small photographic exhibit centered on that Birmingham Sunday bombing. A kind of what if, or rather what would those who were killed or maimed look like today if they had been permitted to live out their precious lives. That got me to thinking the thoughts I expressed in that “voice of a generation” commentary and about the changes in people who did survive, who now have aged, gracefully or not, and who are thinking about, are summing up their lives and what they did, or did not do. Powerful stuff although when one realizes what is what in the world today one has to be very circumspect about the little changes we have made. Not profound but something to think about whatever generation designation.