Jacob Lawrence first came to widespread public attention for his series of paintings chronicling the historically significant migration of blacks out of the Mister James Crow South toward the north which became a flood after World War I-mainly the industrial towns of the Midwest then. Going up the Mississippi. Later Lawrence came to evoke the northern urban scene of the black diaspora. Those later paintings evoke in a dramatic manner the visual search via iconic Jazz among the folk for the high white note that every musician worth his or her salt was looking for. Pictured are the workman, the hipster, the street persona and the respectable too. Thanks Brother Lawrence-there is a very strong reason that some of your work is enshrined in the Afro-American History Museum down in Washington fast by the Washington Monument. 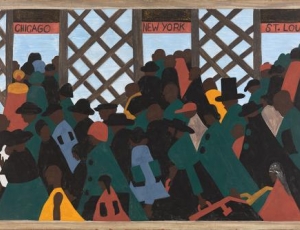 from the migration series 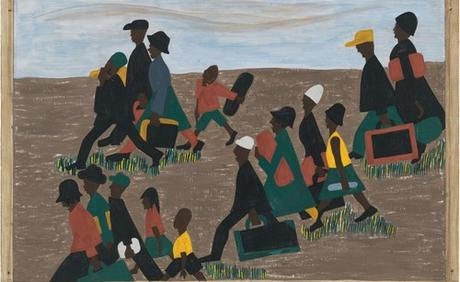