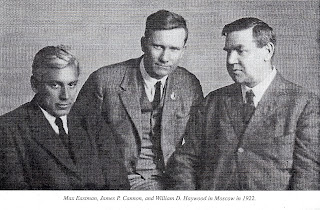 Every January, as readers of this blog are now, hopefully, familiar with the international communist movement honors the 3 Ls-Lenin, Luxemburg and Leibknecht, fallen leaders of the early 20th century communist movement who died in this month (and whose untimely deaths left a huge, irreplaceable gap in the international leadership of that time). January is thus a time for us to reflect on the roots of our movement and those who brought us along this far. In order to give a fuller measure of honor to our fallen forbears this January, and in future Januarys, this space will honor others who have contributed in some way to the struggle for our communist future. That future classless society, however, will be the true memorial to their sacrifices.

Note on inclusion: As in other series on this site (“Labor’s Untold Story”, “Leaders Of The Bolshevik Revolution”, etc.) this year’s honorees do not exhaust the list of every possible communist worthy of the name. Nor, in fact, is the list limited to Bolshevik-style communists. There will be names included from other traditions (like anarchism, social democracy, the Diggers, Levellers, Jacobins, etc.) whose efforts
contributed to the international struggle. Also, as was true of previous series this year’s efforts are no more than an introduction to these heroes of the class struggle. Future years will see more detailed information on each entry, particularly about many of the lesser known figures. Better yet, the reader can pick up the ball and run with it if he or she has more knowledge about the particular exploits of some communist militant, or to include a missing one.

When the union's inspiration through the workers' blood shall run,
There can be no power greater anywhere beneath the sun;
Yet what force on earth is weaker than the feeble strength of one,
But the union makes us strong.

Is there aught we hold in common with the greedy parasite,
Who would lash us into serfdom and would crush us with his might?
Is there anything left to us but to organize and fight?
For the union makes us strong.

It is we who plowed the prairies; built the cities where they trade;
Dug the mines and built the workshops, endless miles of railroad laid;
Now we stand outcast and starving midst the wonders we have made;
But the union makes us strong.

All the world that's owned by idle drones is ours and ours alone.
We have laid the wide foundations; built it skyward stone by stone.
It is ours, not to slave in, but to master and to own.
While the union makes us strong.

They have taken untold millions that they never toiled to earn,
But without our brain and muscle not a single wheel can turn.
We can break their haughty power, gain our freedom when we learn
That the union makes us strong.

In our hands is placed a power greater than their hoarded gold,
Greater than the might of armies, magnified a thousand-fold.
We can bring to birth a new world from the ashes of the old
For the union makes us strong.

Ralph Chaplin began writing “Solidarity Forever” in 1914, while he was covering the Kanawa coal miners’ strike in Huntington, West Virginia. He completed the song on January 15, 1915, in Chicago, on the date of a hunger demonstration. Chaplin was a dedicated Wobbly, a writer at the time for Solidarity, the official IWW publication in the eastern United States, and a cartoonist for the organization. He shared the analysis of the IWW, embodied in its famed “Preamble,” printed inside the front cover of every Little Red Songbook.[1]
The Preamble begins with a classic statement of a two-class analysis of capitalism: “The working class and the employing class have nothing in common.” The class struggle will continue until the victory of the working class: “Between these two classes a struggle must go on until the workers of the world organize as a class, take possession of the earth and the machinery of production, and abolish the wage system.” The Preamble denounces trade unions as incapable of coping with the power of the employing class. By negotiating contracts, the Preamble states, trade unions mislead workers by giving the impression that workers have interests in common with employers.[2]
The Preamble calls for workers to build an organization of all “members in any one industry, or in all industries.” Although that sounds a lot like the industrial unionism developed by the Congress of Industrial Organizations, the IWW would oppose John L. Lewis’ campaign to split from the American Federation of Labor and organize industrial unions in the 1930s. The Preamble explains, “Instead of the conservative motto, ‘A fair day’s wage for a fair day’s work,’ we must inscribe on our banner the revolutionary watchword, ‘Abolition of the wage system.’” The IWW embraced syndicalism, and opposed participation in electoral politics: “by organizing industrially we are forming the structure of the new society within the shell of the old.”[3]
The outlook of the Preamble is embodied in “Solidarity Forever,” which enunciates several elements of the IWW's analysis. The third stanza (“It is we who plowed the prairies”) asserts the primacy of the role of workers in creating values. This is echoed in stanzas four and five, which provide ethical justification for the workers’ claim to “all the world.” The second stanza (“Is there aught we hold in common with the greedy parasite”) assumes the two antagonistic classes described in the Preamble. The first and fifth stanzas provide the strategy for labor: union solidarity. And the sixth stanza projects the utopian outcome, a new world brought to birth “from the ashes of the old.”
Chaplin was not pleased with the widespread popularity of "Solidarity Forever" in the labor movement. Late in his life, after he had become a voice opposing (State) Communists in the labor movement, Chaplin wrote an article, “Why I wrote Solidarity Forever,” in which he denounced the “not-so-needy, not-so-worthy, so-called ‘industrial unions’ spawned by an era of compulsory unionism.” He wrote that among Wobblies “there is no one who does not look with a rather jaundiced eye upon the ‘success’ of ‘Solidarity Forever.’" "I didn't write 'Solidarity Forever' for ambitious politicians or for job-hungry labor fakirs seeking a ride on the gravy train. . . . All of us deeply resent seeing a song that was uniquely our own used as a singing commercial for the soft-boiled type of post-Wagner Act industrial unionism that uses million-dollar slush funds to persuade their congressional office boys to do chores for them.” He added, “I contend also that when the labor movement ceases to be a Cause and becomes a business, the end product can hardly be called progress.”[4]
Despite Chaplin's misgivings, "Solidarity Forever" has retained a general appeal for the wider labor movement because of the continued applicability of its core message. Many[citation needed] singers do not sing all six stanzas of "Solidarity Forever," typically[citation needed] dropping verses two (“Is there aught we hold in common with the greedy parasite”) and four (“All the world that’s owned by idle drones is ours and ours alone”), thus leaving out the most radical material.[5]