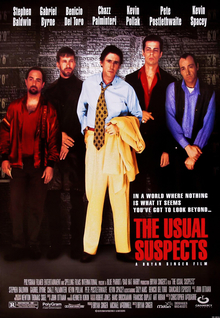 In my old neighborhood at least among the corner boys of my own generation that I hung around with at the variety store that was our “headquarters” everybody loved a con man, if, naturally, not being conned. You know we loved guys who could spin up a tale out pure cloth and produce some gold, dinero, moola for their efforts (there may have been female con artists but I don’t recall any since they were spending their time leading us a merry chase in a different way and if that was the case then almost every gal around the town was a con artist). So Kevin Spacey as the beautifully characterized “Verbal” Kint in the film under review, The Usual Suspects, would have been worshipped as a living god back in the day. No false idols need apply as we lighted the candles to one of our own.


Here’s why. After a horrendous ship’s explosion one of the two survivors of what apparently was a gang war one Verbal Kint was being interrogated by the feds, by a customs agent since there was suspicion that the war had been over drugs or some other contraband. Through a series of flashbacks Verbal leads the agent on a verbal merry chase about what had occurred at the docks. He had been among five “usual” suspects who were in a police line-up in New York who had through a series of adventures, successful adventures in grabbling dough, and had been “hired” by an unknown master criminal to do some work for him after his agent made a very forceful case for why they should do sos if they valued their lives, and of anybody even remotely related to them. After initially balking at the deal they took it on when the guy who seemed to be the leader of the group, Dean Keaton, played by Gabriel Byrnes, committed to the caper. They went to L.A. to meet their adversaries and consummate the deal. Then all hell broke loose on the ship and everything and everybody went boom boom.


Everybody but Verbal who lived to tell the tale. See here is the beauty of a guy like Verbal. He put himself out in public as a small time con, a “crip” nobody (that crippled up part as it turned out he was faking, another beautiful move) in the company of serious desperados like Keaton and the other hombres so nobody caught the mis-directions he was feeding everybody from his comrades to the fuzz. He wove a big-time tall tale to the agent about an evil Mister Big who had been manipulating everything and whom when Verbal “confessed” who it was turned out to the now deceased Keaton. Except, well, except that well-woven tale was all fluff because Mister Big was none other than guess who. Yeah Verbal walked into the sunset with all the dough, with immunity and with all the feds scratching their heads. Hail Verbal.
Posted by american left history at 5:20 PM