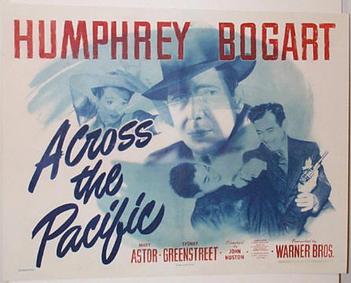 Free, free at last, good god in Heaven free at last-for the moment anyway. All readers, young and old, recent or longtime, interested or disinterested, movie aficionados or not, but at least breathing will note, or should be expected to note, that one Phillip Larkin did not start out his usually beautifully-etched film review with an expletive (which one for the young, recent, disinterested, not aficionado brethren although I assume still breathing is a book sealed with seven seals). Why? Finally, good God in heaven finally, the divinely-inspired site impresario Greg Green and he hard-working thoughtful minions on the recently established Editorial Board have by unanimous assent permitted me to go through my paces on a real movie review, an Bogie- aficionado drenched review of one of his lesser classics-Across the Pacific.

For those who have been out of the country, have been hospitalized, have been up the Amazon with no means of transportation or communication here is a quick primer on why what should have been a routine past through quickie review by me is worthy of every hosanna in the book. Through inexperience, newness to this site, or bad advice from that hither-to-fore deadbeat Ed Board our esteemed guru Greg Green had the bizarre idea that I should do kiddie film reviews, you know things like Captain America, The Avengers, Batman. All that silliness that passes for film experiences among the younger set for the simple fact that the eight to maybe twenty-one audience they are geared to do not have the energy or ability to sit for twenty minutes and read a freaking comic book. Instead are popcorn-addled and soft drink-doped for a couple of hours to listen to grunts and two word sentences, physically violent action every thirty seconds warranted or not, and some silly mid-credit come-ons to the next so-called adventure film. The reasoning at the time and I am not sure reasoning is the right word is that unlike the old regime under the now fully deposed, some unkind older writer-types saying purged, and exiled former site manager, my old growing up friend Allan Jackson who let us do whatever interested us as long as we did it well, the whole writing staff should “broaden their horizons by random assignment. Sorry, bullshit, sorry.

Moreover that whole policy, and I used that word advisedly, was to let the self-designated “Young Turks” who rebelled against the old Jackson regime and led the ugly purging process get to write some decent stuff and not a rehash of what the older writers threw away as drafts. Under Allan mostly stuff about that growing up in the 1960s during that paradise time to be living, Allan and the older writers time which they could have given a damn about. Couldn’t know things about like the Summer of Love, 1967 for the simple fact that were in swaddling clothes or not yet born. In my case I drew that kiddie stuff because Greg fell weak-kneed for the line this young kid, Jesus, twenty-five years old, Kenny Jacobs gave him about how his movie-addled film noir parents dragged his young ass to a bunch of film festival retrospectives when he was about eight. As against my spending real-time, real-time growing up teenager, young adult, adult, old adult time starting on those lonely Saturday afternoon matinees Strand Theater double-features to get out of my turbulent household haunting the retros every chance I got. Won my spurs on doing Bogie, Robert Mitchum, Glenn Ford Gloria Grahame, Lauren Bacall, Mary Astor, Jane Greer, background reviews under the old regime which loved to mix it up with the older material. (Allan Jackson frowned on most of the modern stuff saying that other more informed sources could provide those kind of reviews quite nicely in places like the American Film Gazette where he had started out and that our job was to do films, books, music, culture, etc. which reflected the broader history of the American experience which this site is committed too.)

Without tooting my own horn too much I would be remiss if I didn’t mention how I got back on top. Maybe provide an object lesson in how to work through the increasing bureaucracy of even barebones on-line operations which supposedly don’t have the hassles of brick and mortar hard copy publications to slow things down and make everybody a speck. At first I resented being “demoted” via the Greg Green so-called democratic new regime from being a longtime Associate Film Critic to just another generic writer. I let that pass figuring eventually the bureaucratic mentality would catch up to the new crowd and they would be handing out titles like candy. What ate at me and I am not afraid to say so now that the situation has been permanently resolved was being pushed aside on my specialty (they wouldn’t dare sent me back to the comics they don’t need the seven kinds of hell I would bring down which would make beautiful super-hero Thor’s hammerings seem like some street junkie’s).

I already gave you what the kid tried to pull with his lame parent story. What I did in response was my classic belly-aching in print, okay in cyberspace, moaning and groaning leaving about three lines for the review (for films probably bam-bam kick worth about two) against that punk kid, Kenny Jacobs, you have seen his weird reviews I am sure. Did it enough to switch gears on the wily young bastard. Got my old route back and here I am ready to dig deep into this low-rent 1940s Bogie pic that will never make his top ten films list but who cares because given the actors lined up in this one I can hit a homerun with The Maltese Falcon and make everybody forget this clunker.
**********

Everybody, at least everybody over the past few generations has certain touchstone events which affect, even if indirectly, their lives.
Will know exactly where they were when they heard the news. For mine John Fitzgerald Kennedy’s assassination on November 22, 1963 (informed over the high school PA system by a distraught headmaster). For younger generations 9/11 and you need not say more, need to throw a year date in. For my parents, the ones who came of age in the 1930s Great Depression and slogged through World War II on two oceans, December 7, 1941, the day of FDR’s famous infamy, the day the Japanese bombed Pearl Harbor is that touchstone and sets the framework for this film. (And Greg Green, no many how many reviews he oversaw over at American Film Gazette before coming here, must have had blinders on when young Kenny Jacobs begged him to do this review. What possible frame of reference, other than he had seen the film when he was a kid with those film freak parents, could he bring to any such review.)

That sets the plot-line frame. The other component is the cohort of actors here led by Humphrey Bogart, Mary Astor, and Sydney Greenstreet who the previous year under the original director here, John Huston, who signed on to the Army before the finish, starred in one of the great movies of all time, The Maltese Falcon. Although this veiled propaganda film does not come close the three artists work through the problems presented by such a film fairly well although as I mentioned this will not go down as one of Bogie’s best.

As my old friend and former boss as Senior Film Critic now retired, Sam Lowell, would say at this point (and encourage us to do so as well) here’s the “skinny.” Captain Leland, Bogie’s role, has been cashiered out of the Coast Guard for some petty crime. All that a ruse so that he can work an operation as a secret agent against those who were working their asses off for the soon-to-be formal enemies, the Japanese, as the war clouds thicken in late 1941. Number one agent is a sociology professor, Doctor Lorenz, out of the Philippines (whose citizens will be treated very badly when Japanese invasion time comes), played by the nefarious slippery Sydney Greenstreet who admires the Japanese way of doing things. The joker in the deck is the good-looking footloose woman, Alberta, played by Mary Astor, not a femme fatale this time but eye candy to Leland’s eyes. The Captain is not sure where she fits in but he takes an under the sheets run at her anyway. Their meeting place, a Japanese freighter which is heading, well, across the Pacific via the short route Panama Canal in the days when that meant a considerably shorter trip than around the Cape, maybe now too since it had been upgraded for the super-tankers.

Things go along as they do with Leland making it clear to Lorenz he is a hired gun, a mercenary, a soldier of fortune ready to throw lead for the highest bidder. Willing too to tell what he knows about gun emplacements when the time comes. Al the while playing footsie with Alberta and while trying to figure out what the good Doctor is up to. Things start getting dicey when the Japanese ship is not permitted to enter the canal locks and things get hairy with Lorenz and Alberta departing for whereabouts unknown. The day, December 6, 1941 telegraphed through a newspaper popped on screen, so you know something bad is going to happen when all trails lead Leland to a plantation. To a place where it turns out Alberta’s drunken father lives and where the damn Japanese were painfully constructing a torpedo plane piece by piece to blow the strategic canal locks to kingdom come (my father a Pacific War battle-tested Marine never until he died called them anything but Nips, with a snarl, never.)

Of course you know that is never going to happen as Bogie pulls the plug in the plan blasting every Japanese in sight (not going to happen as it didn’t in history but the reason here one heroic Bogart saving the day). Just like in The Maltese Falcon the evil Greenstreet bites the dust on his dreams. Here though innocent Alberta is not subject to being sent-over, sent to face the big step-off. Hey, I did pretty well with this period piece loser. Yeah I’m back in the saddle.
Posted by american left history at 1:11 PM