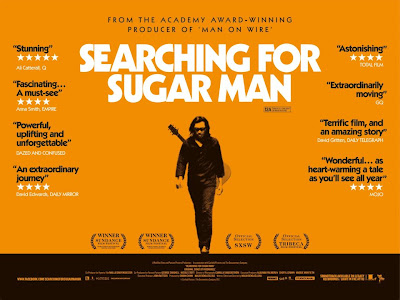 Rodriquez is himself a Sixties survivor. His songs capture the mood of the late 1960s and the early 1970s. They reflect the anger, the aspirations, and the despair of the era.

When the musician known simply as Rodriguez appeared on the David Letterman Show in August 2012, dressed in a black hat, black shirt, and dark glasses, he sang just one of his poignant songs, “Crucify Your Mind.” The only words he spoke were, “Thank you.”

Viewers might well have wondered who he was, though Letterman explained that Rodriguez was the subject of a film by Malik Bendjelloul, Searching for Sugar Man, the sleeper documentary of the year distributed by Sony Pictures.

Increasingly, audiences around the world know who he is, especially if they’ve seen the movie about him and have listened to his CD that offers 14 songs he originally recorded more than 40 years ago and that never reached the bottom let alone the top of any music chart.

Sixto Rodriguez is one of the strangest singer/songwriters in the annals of twentieth-century American music, as the film about him makes abundantly clear.

He even talks in the movie and says more than “thank you,” though the images of him, such as one in which he walks alone through the snow, say as much about him as any words he utters. His story is unique; indeed, there’s no one remotely like him. At the same time, his story, which touches on the fickleness of fame, success, and failure, appeals to a wide audience and not only to survivors of the Sixties, a time when Rodriguez first appeared out of nowhere on the music scene.

Rodriquez himself is a Sixties survivor. His songs capture the mood of the late 1960s and the early 1970s. They reflect the anger, the aspirations, and the despair of the era. To listen to the soundtrack (Searching for Sugar Man 2012, the original motion picture soundtrack with songs by Rodriguez, published on the Sony Legacy label), is to be transported back to that time and place, especially on songs such as “Inner City Blues,” and “This is Not a Song, It’s an Outburst: Or, the Establishment Blues.”

Part bluesman, part rock ‘n’ roller, and part folk musician, Rodriguez recorded two albums in 1970 and 1971 when he was 28 and 29 years old and living in Detroit. While the albums went nowhere in the States, they became big hits among anti-apartheid whites in South Africa and it’s easy to understand why. The lyrics are clear and concise; they’re anti-establishment -- any and every establishment -- and they’re also playful and even humorous. Moreover, the music, which has a lyrical beat, is an open invitation to get up and dance.

Still, the lyrics alone would not make Rodriguez a memorable artist worth knowing about 40 years after the beginning and nearly simultaneous end of his own abortive career. It’s the story of his life that matters: how he never became bitter or resentful and just kept on keeping on.

Rodriquez would never have appeared on the Letterman Show and he’d be as unknown today as ever if it were not for Craig Bartholomew-Strydom, a South African rock journalist turned detective, who tracked him down, in part by using the lyrics to his songs.

Sixties survivor Rodriguez.
The movie, Searching for Sugar Man, tells the fascinating story of Bartholomew-Strydom’s relentless search that led him from Johannesburg to Detroit where he found Rodriguez and his two daughters -- who explain that they were raised without wealth and material goods, but with a rich appreciation for culture.

Rodriguez comes across as a good father, a humble workingman, and a countercultural icon. His CD is a time capsule of hippie culture circa 1970. Looking for sad love songs? They’re here. Want visionary and prophetic lyrics? You’ll find them here. Eager to hear political invective? It’s also here.

Rodriquez is a very sharp observer of human fakery, foibles, and flaws. Perhaps to satirize fakery, as Rodriguez does, you have to understand it from the inside out and even indulge in it. There’s a fine line between the real and the parody and Rodriquez adheres to it. He’s all heart and sentiment and at the same time he can be ironical and a kind of put-on artist.

On the first track, “Sugar Man,” he longs for the arrival of the “Silver majik ships” that carry “Jumpers, coke, sweet Mary Jane.” On the second, “Crucify Your Mind,” he tells an unnamed other, “I've seen your self-pity showing/And the tears rolled down your cheeks.” On the third track, “Cause,” he’s full of self-pity and then on the fourth track, “I Wonder,” he’s sassy, irreverent, and timeless. “I wonder how many times you had sex,” he sings. “I wonder do you know who’ll be next.”

“Can’t Get Away” -- number seven -- is about the longing to escape and the impossibility of really escaping. “Inner City Blues” takes on the assassination of Dr. Martin Luther King, Jr. “King died/ Drinking from a Judas cup,” Rodriguez sings. The same song addresses the gap between the generations. “Papa don't allow no new ideas here,” he wails.

n the ironical “Sandrevan Lullaby,” he addresses the nation itself: “America gains another pound/ Only time will bring some people around.” The third song from the end, “I’ll Slip Away,” is perhaps the most personal. “You can keep your symbols of success,” he sings. “I'll pursue my own happiness/ And you can keep your clocks and routines.”

Rodriquez did exactly what he said he’d do. By the early 1970s, he was done with the world and perhaps sick of the world. “For too long I just put you on,” he sings in “I’ll Slip Away.” He adds, “Now I'm tired of lying and I'm sick of trying.”

But the world was not done with him or sick of him. In the movie and on the CD Searching for Sugar Man, he’s back bigger than ever before, and the Sixties are back, too, with poetry and with whimsy.

[Jonah Raskin is the author of American Scream: Allen Ginsberg’s Howl and the Making of the Beat Generation, and For The Hell of It: The Life and Times of Abbie Hoffman. A regular contributor to The Rag Blo, he’s a professor emeritus at Sonoma State University. Read more articles by Jonah Raskin on The Rag Blog.]