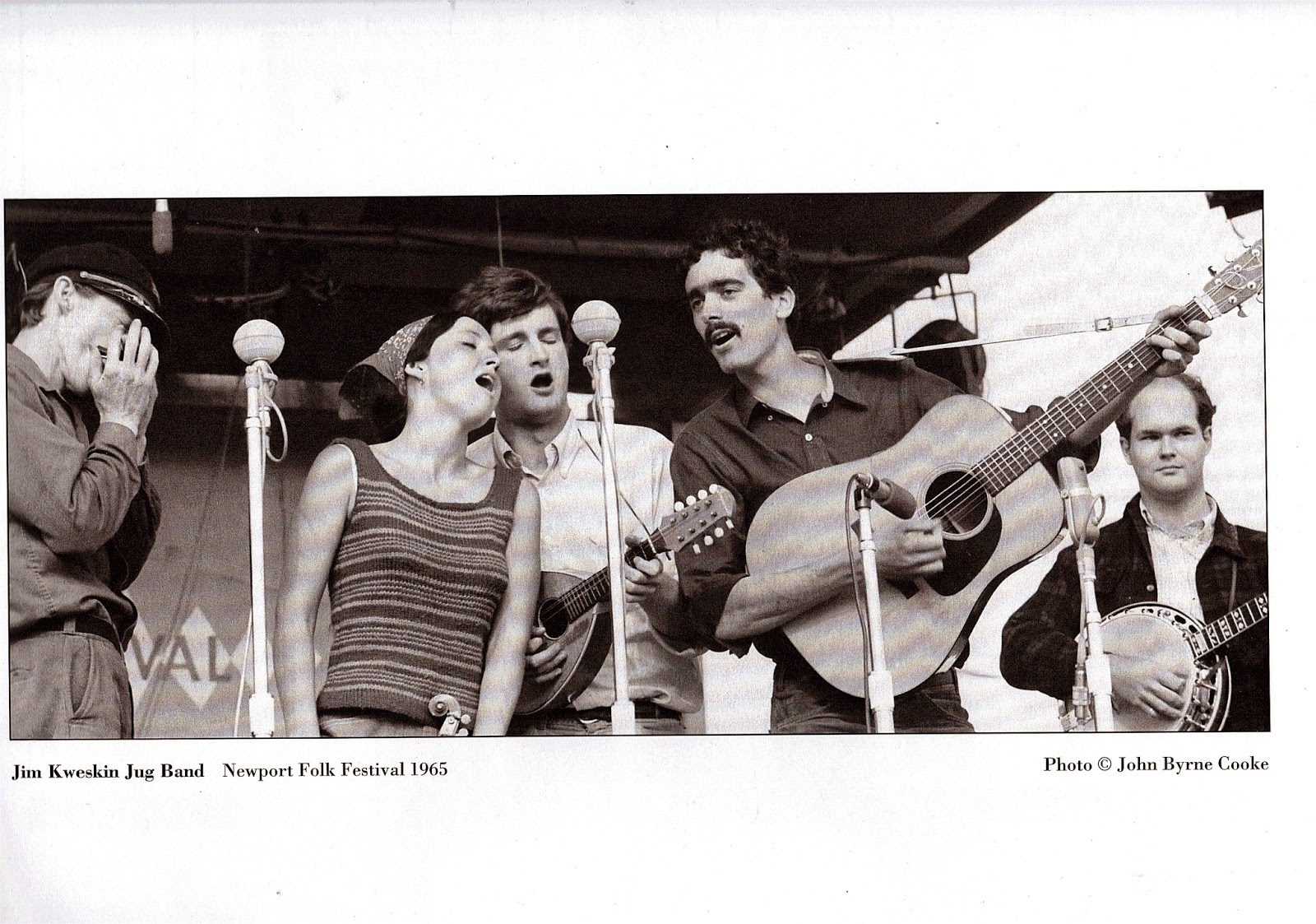 Who knows how it happened, how the jug bug craze got started in the folk minute of the 1960s, maybe it happened just like in the 1920s and early 1930s when “jug” got a boost by the likes of the Memphis Jug Band, The Mississippi Sheiks, and about twelve other state-named Sheik groupings using home-made weapons, uh, instruments, picked up from here and there, a jug here, a triangle there, fashion a kazoo of wood or grab a metal one at Woolworth's 5&10 there (got you on that one folkies, right, but they along with Sears & Roebuck's catalogue and maybe Marshall Fields' too sold all manner of musical instruments and before the folk boom of the 1960s when with disposable income [read: allowances and parents of means ready to indulge a few fantasies through their kids] which allowed kids to buy instruments from music stores a lot of guys, guys like Hobart Smith, Homer Jones and Matthew Arnold got their instruments handed down to them or some desperate mother or father like Guy Davis,' Son House's, Cliff Mathers', and Slim Parsons' ordered straight from the catalogue not the finest instruments but those guys spoke highly of their first store-bought instruments even when they could afford better when they made their marks), pluck a worn out grandmother's washtub there and come up with some pretty interesting sounds. Yeah, once you listen to the old stuff on YouTube these days where the Memphis Jug Band has a whole video file devoted to their stuff, same with a lot of the others, you could see where that period might have been the start of the big first wave.

Maybe though back in the 1960s somebody, a few musicians, got together and figured here was something that folk-crazed kids, a very specific demographic not to be confused with all of the generation of ’68 post-war baby boomers coming of age rock and roll jail break-out but those who were sick unto death of the vanilla rock and roll that was being passed out about 1960 or so, get this, music that more than one mother, including my mother, thought was “nice” and that was the kiss of death to that kind of music after the death of classic Elvis/Chuck/Bo/Jerry Lee rock for a while before the Brits came over the pond to stir things up and the West Coast acid-eaters ate enough of the drug to sink the Golden Gate Bridge or at least the park and headed east in the Second Coming of rock and roll (not to be confused with the Christian second coming which would signify the end of the world as we know it or with Yeats' mystical version with the seven-headed dragon staring you in the face so stay away from those who want to travel that route) so they started tinkering. Maybe, and remember the folk milieu perhaps more widely that the rock milieu was very literate, was very into knowing about roots and genesis and where things fit in (including where they, the folkies who also a vision about a kinder, gentler world all mixed in until heads got busted in goddam Mississippi goddam, got their heads busted on Fifth Avenue in NYC for calling for an armed truce to the Vietnam War, got their heads busted come May Day 1971 when all the evil spirits in the world rose to bust a certain kind of dream) somebody in the quickly forming and changing bands looked up some songs in the album archives at the library, or, more likely from what later anecdotal evidence had to say about the matter, found some gem in some record store, maybe a store like Sandy’s over between Harvard and Central Squares in Cambridge who had all kinds of eclectic stuff if you had the time and wherewithal to shuffle through the bins. Institutions like Sandy's and a lot of towns had such oases even some unknown name ones like Larry's in Portland, Maine and Sukie's out in Eire, Pennsylvania if you can believe that sustained many for hours back then in the cusp of the 1960s folk revival when there were record stores on almost every corner in places like Harvard Square and the Village in the East you could find some gems if you searched long enough and maybe found some old moth-eaten three volume set Harry Smith’s Anthology of American Folk Music and came up with The Memphis Jug Band and K.C. Moan or the Sheiks doing Rent Man Blues, maybe Furry Lewis on Kassie Jones (although sometimes the search was barren or, maybe worse, something second hand by Miss Patti Page singing about Cape Cod Bay all moony for the parents or try to hustle our young emotions but traipsing a dog in front of us, Tennessee Ernie Ford singing about sixteen tons, tons of coal and breaking your back too, or good god, some country bumpkin George Jones thing like I couldn't even give you a title for stared you in the face).

From there they, the jug masters of the revival, found the Cannon’s Stompers, the Mississippi Sheiks or the Memphis Jug Band, could be the way to prosper by going back to those days if they kept the arrangements simple, since that was what allowed the jug bands to prosper in the commercial markets of those days, keep the melody so simple that every working stiff and every forlorn housewife had the tune coming out of the sides of their brains and that was that. See, everybody then was looking for roots, American music roots, old country roots, roots of some ancient thoughts of a democratic America before the robber barons and their progeny grabbed everything with every hand they had on their fetid bodies. Let’s make it simple, something that was not death-smeared we-are- going-to-die-tomorrow if the Ruskkies go over the top red scare bomb shelter Cold War night that we were trying to shake and take our chances, stake our lives that there was something better to do that wait for the foreordained end.

And that wide awake search was no accident, at least from the oral history evidence I have held from those who came of age with me in that time after having grown up with rock and roll and found in that minute that genre wanting.  Some went reaching South to the homeland of much roots music, since those who were left behind or decided out of ennui or sloth to stay put kept up the old country British Isles Child ballad stuff (their own spin on the stuff not Child’s Brattle Street Brahmin rarified collection stuff) and found some grizzled old geezers like Buell Kazee, Hobart Smith, Homer Jones, Reverend Jack Robinson and the like, who had made small names for themselves in the 1920s when labels like RCA and Paramount went out looking for talent in the hinterlands.

So there was history there, certainly for the individual members of the Jim Kweskin Jug Band, Jim, Geoff Mulduar, Mel Lymon, Maria Muldaur, Fritz Richmond , the most famous and long-lasting of the 1960s jug groupings, all well-versed in many aspects of the American Songbook (hell, I would say so, say they were well-versed, even old tacky Tin Pan Alley Irving Berlin, smooth Cole Porter and the saucy Gershwin Brothers got a hearing from them and if they could simple those damn complicated Tin Pan Alley melodies they took a shot at those as well), history there for the taking. All they needed was a jug, a good old boy homemade corn liquor jug giving the best sound but maybe some down in the cellar grandpa jug from the old days of Ball jars and crockery, a found washtub grandma used to use before she got that electric washer from the old garage where she put it against a rainy day when she might have to use it again when hard times came again as they usually did, a washboard found  in that same location, a triangle from somewhere, a kazoo from the music store, some fiddle, a guitar, throw in  a tambourine for Maria and so they were off, off to conquer places like Harvard Square, like the Village, like almost any place in the Bay area within the sound of the bay.

And for a while the band did conquer, picking up other stuff chimes, more exotic kazoos, harmonicas, what the heck, even up-graded guitars and they made great music, great entertainment music, not heavy with social messages but just evoking those long lost spirits from the 1920s when jug music would sustain a crowd on a Saturday night. Made some stuff up as they went along, or better, made old stuff their own like Washington At Valley Forge, Bumble Bee, Sweet Sue from Paul Whitman and plenty of on the edge Scotty Fitzgerald Jazz Age stuff that got people moving and forgetting their blues. Here is the beauty of it unlike most of the 1920s first wave stuff which was confined to records and radio listening, a lot of the rarer stuff now long gone lost, you can see the Kweskin Jug Band back in the day on YouTube and see the kind of energy which they produced when they were in high form (music that they, Jim and Geoff anyway, still give high energy to when they occasionally appear together in places like Club Passim in Harvard Square these days). Yeah, in the beginning was the jug…