*****As Obama, His House And Senate Allies, His “Coalition Of The Willing” Ramp Up The War Drums In Syria -Again- Stop The Bombings

*****As Obama, His House And Senate Allies, His “Coalition Of The Willing” Ramp Up The War Drums In Syria -Again- Stop The Bombings-Stop The Incessant Escalations-- Immediate Withdrawal Of All U.S. Troops And Mercenaries From The Middle East! 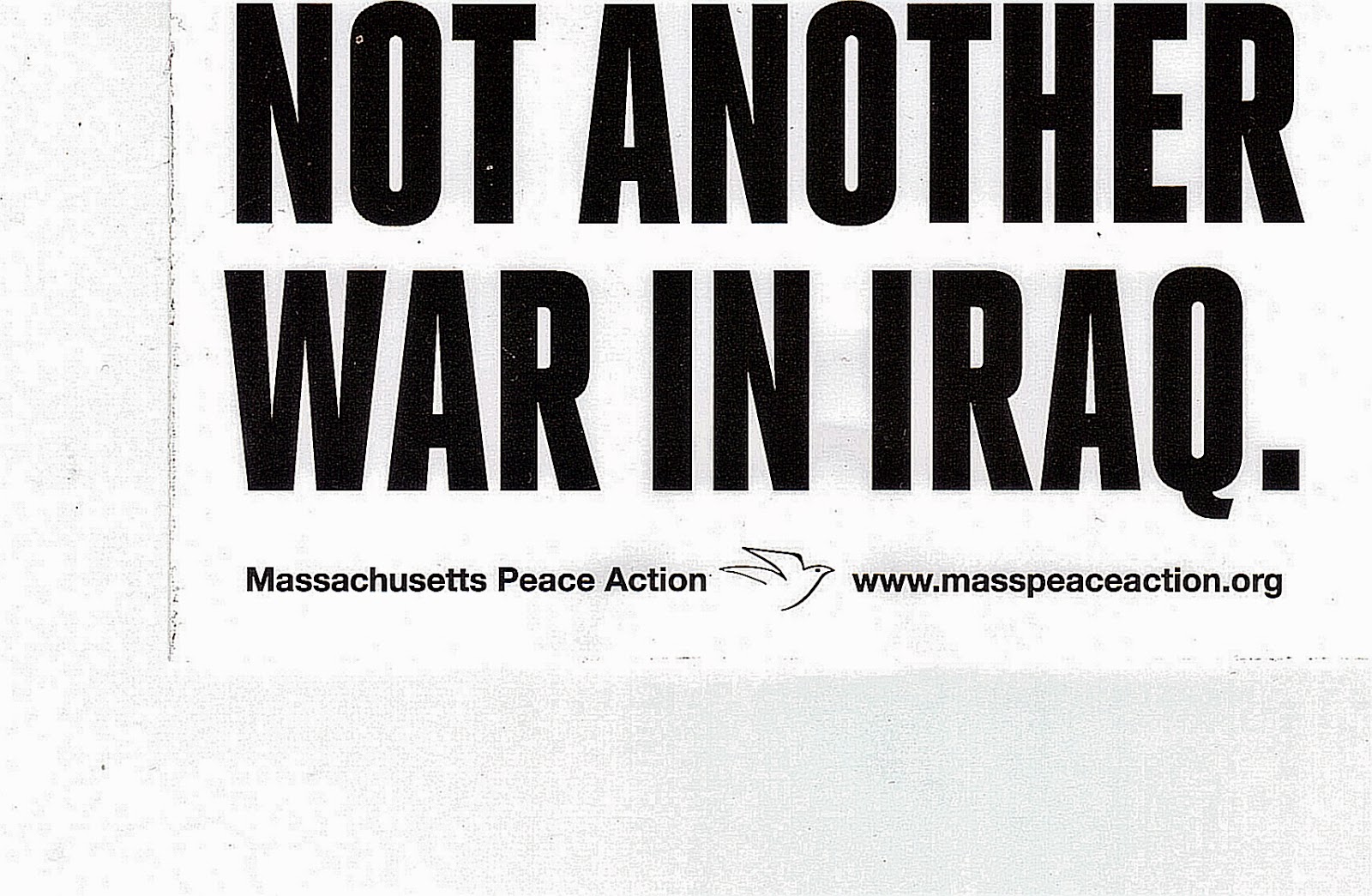 
I have already recently mentioned elsewhere the night not long ago when my friend from high school, Carver High Class of 1967 down in southeastern Massachusetts, Sam Lowell, who I hadn’t seen in a while were, full disclosure, having a few high-shelf whiskeys at Jack Higgin’s Sunnyvale Grille in Boston, arguing over the increasing use of and increased dependence on killer/spy drones in military doctrine, American military doctrine anyway. I also mentioned that night, which is germane here, in discussing the broader category of the seemingly endless wars that the American government is determined to wage at the close of our lives ( we are both on the wrong side of seventy so check the actuarial tables if you think I am mistaken) so that we never again utter the word “peace” with anything but ironic sneers that I, again for full disclosure, am a supporter of Veterans For Peace and have been involved with such groups, both veteran and civilian peace groups, since my own military service ended back during Vietnam War days.

For those not in the know that organization of ex-veterans of the last couple of generations of America’s wars has been for over a quarter of a century (actually just commemorated its thirtieth anniversary this summer of 2015) determinedly committed to opposing war as an instrument, as the first instrument, of American policy in what that government sees as a hostile world (a view that it has held for a long time, only the targeted enemy and the amount of devastation brought forth has changed).

I also noted Sam’s position with his concurrence, full disclosure, he was granted an exemption from military duty during the Vietnam War period after his father had died suddenly in 1965 and he was the sole support, or close to it, of his mother and four younger sisters, was a little more nuanced if nevertheless flatly wrong from my perspective on the killer/spy drones. I thought his argument perhaps reflected an “average Joe” position of a guy who did not serve in the military and had not seen up close what all the “benefits” of modern military technology have brought forth to level whatever target they have chosen to obliterate and under what conditions. More importantly that Sam, who marched in any number of anti-Vietnam War parades with me after my service was over and I gave him the “skinny” on what was really going on in that war, had made in the post-9/11 period like many from our generation of ’68 a sea-change in their former anti-military positions. Something in that savage criminal attack in New York City against harmless civilians got the war lusts, yes, the war lusts up of people, good, simple people like Sam and lots of “peaceniks” from our generation to kill everything that got in our way. LBJ and Richard Nixon would have in their graves rather ironic smiles over that change of heart.

And those many who changed positions, who sulkily went along with whatever was “necessary,” including I remember one time a woman who identified herself as a Quaker who, I swear, asked plaintively on some radio talk show I was listening to whether we (meaning the American government and not her individually I assume but who knows) could not surgically nuclear bomb Al Qaeda from all memory. Sam got caught up in this war lust wave and has since, starting with his initial approval of the “shock and awe” campaign in Iraq, wound up in the end left with egg all over his face.

But Sam is nothing if not determined just like me to carry on in his views and so another night at Jack Higgin’s found us arguing over the more recent egg-in-face aspects of American war policy in the Middle East with the rise of ISIS, the demise of the failed states of Syria, Iraq, and Afghanistan and with it whatever rationale made the American government built a thing from which it had to run.

As is also usual these days like with the question of killer/spy drones we argued for a few hours or until the whiskey ran out, or we ran out of steam and agreed to disagree. The next day though, no, the day after that I again got to thinking about the issue of the debacle of American policy and while not intending to directly counter Sam arguments wrote a short statement that reflects my own current thinking the matter. Here it is:
“Nobel “Peace” Prize Winner, U.S. President Barack Obama (and yes that word peace should be placed in quotation marks every time that award winning is referenced in relationship to this “new age” warmonger extraordinaire), abetted by the usual suspects in the House and Senate (not so strangely more Republicans than Democrats, at least more vociferously so) as internationally (Britain, France, the NATO guys, etc.), has over the past year or so ordered more air bombing strikes in the north of Iraq and in Syria, has sent more “advisers”, another fifteen hundred at last count [summer of 2015] but who really knows the real number with all the “smoke and mirrors” by the time you rotate guys in and out, hire mercenaries, and other tricks of the trade long worked out among the bureaucratiti, to “protect” American outposts in Iraq and buck up the feckless Iraqi Army whose main attribute is to run even before contact is made, has sent seemingly limitless arms shipments to the Kurds now acting as on the ground agents of American imperialism whatever their otherwise supportable desires for a unified Kurdish state, and has authorized supplies of arms to the cutthroat and ghost-like moderate Syrian opposition if it can be found to give weapons to {which it could not and backed off for now in the Fall of 2015],  quite a lot of war-like actions for a “peace” guy (maybe those quotation mark should be used anytime anyone is talking about Obama on any subject ).

Of course the existential threat of ISIS has Obama crying to the high heavens for authorizations, essentially "blank check" authorizations just like any other "war" president, from Congress in order to immerse the United States on one side in a merciless sectarian war which countless American blunders from the get go has helped create.

All these actions, and threatened future ones as well, have made guys who served in the American military during the Vietnam War and who, like me, belatedly, got “religion” on the war issue from the experience (and have become a fervent anti-warrior ever since), learn to think long and hard about the war drums rising as a kneejerk way to resolve the conflicts in this wicked old world. Have made us very skeptical. We might very well be excused for our failed suspension of disbelief when the White House keeps pounding out the propaganda that these actions are limited when all signs point to the slippery slope of escalation (and the most recent hikes of whatever number for "training" purposes puts paid to that thought).
And during all this deluge Obama and company have been saying with a straight face the familiar (Vietnam-era familiar updated for the present)-“we seek no wider war”-meaning no American combat troops. Well if you start bombing places back to the Stone Age, or trying to, if you cannot rely on the weak-kneed Iraqi troops who have already shown what they are made of and cannot rely on a now virtually non-existent “Syrian Free Army” which you are willing to give whatever they want and will still come up short what do you think the next step will be?

Now not every event in history gets repeated exactly but given the recent United States Government’s history in Iraq those old time Vietnam vets who I like to hang around with might be on to something. In any case dust off the old banners, placards, and buttons and get your voices in shape- just in case. No New War In Iraq!–Stop The Bombings In Iraq And Syria!- Stop The Arms Shipments!-Vote Down The Syria-Iraq War Budget Appropriations!
***
Here is something to think about picked up from a leaflet I picked up at a recent (small) anti-war rally:

Workers and the oppressed have no interest in a victory by one combatant or the other in the reactionary Sunni-Shi’ite civil war in Iraq or the victory of any side in Syria. However, the international working class definitely has a side in opposing imperialist intervention in Iraq and demanding the immediate withdrawal of all U.S. troops and mercenaries. It is U.S. imperialism that constitutes the greatest danger to the world’s working people and downtrodden.

[Whatever unknown sister or brother put that idea together sure has it right]
Posted by american left history at 5:22 PM