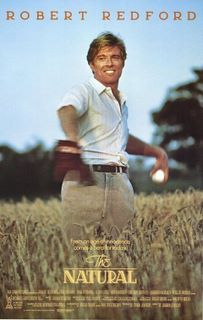 The Natural, starring Robert Redford, Glenn Close, Robert Duvall, Kim Basinger, directed by Barry Levinson, based on the novel of the saem name by Bernard Malamud, 1984

In my growing up time in the 1950s the premier American sport of the time was baseball, baseball played from sandlot to professional. And in an easier time, a less rushed time when one had the hours to devote attention to the sport from neophyte player to avid sport’s fan that made sense. Although today football in all its glory and precision has taken its place I believe that one would be hard-pressed to write a book or produce a movie about the saga of any individual football player like Bernard Malamud and later Barry Levinson was able to do with the story line of the ballplayer under review, The Natural. Somehow the simplicity of picking up a ball and bat and running to some sandlot for a pick-up game evokes a lot more of the American spirit than the necessarily more organized, team-driven precision and expensive game of football.

This is the way an American sports’ story, maybe the best baseball story ever written played out (with due apologies to Ring Lardner and his You Know Me, Al and its wonderful sociological insights series). A fair-haired All-American boy from out in the farmlands of the Midwest Roy Hobbs, played by fair-haired All-American boy actor Robert Redford (who else in the 1970s or 1980s would be able to play the role as well) dreams the big time dream of becoming a professional baseball player with all the trimmings. A dream which ironically would include not just professional status but to be known by the man or woman on the street, by young impressionable boys too, as the “greatest to ever tread the bases.” He had it all, all the talent, all the desire and best of all a devastating fast ball which would cower even the great sluggers of his day like the fabled Ruth, the Babe, and the machine-like Hack Wilson. That, however, would be his downfall once he got tagged by a woman, an unstable woman who wanted to take down somebody who was either the greatest at what he did or was as with Roy going to be the greatest. So in answer to her straight-forward question about his potential status in the baseball Hall of Fame firmament he got a few bullets, a few silver bullets for his efforts. She was no rookie at that game either having wasted a couple of other wannabes but this time she capped off her efforts with a big fall from a high hotel window, End of career before it started, end of story.

Well no wait a minute it would be a very short story, although hardly an unusual one, where a prospect in any sport came up short and went back down to the dunghill from whence he came. So Roy, no longer the boy wonder, no longer with any illusions, longer, much longer in the tooth than in those first scenes but still with a mountain of talent and determination showed up sixteen years later in New York, in the “bigs” with a shot, one last shot at glory before he has to hang up the cleats (while the young players have visions of eternity the reality of time and younger faster talent eventually catches up with even the best). Somehow out in the boondocks some professional scout for the lowly New York Knights saw something in Roy and signed him to a contract-past unknown.

Those lowly Knights were something like the New York Mets of my youth-the gang who couldn’t hit, pitch, field straight and so were mired in the cellar of the league they were in much to the chagrin of the manager-owner of the club, Pops. But get this that Connie Mack kept Roy’s light hidden under a bushel for about as long as he could until one day he in desperation let Roy take batting practice. Naturally the Natural banged them out of the park like clockwork and after a weird accident to the troublesome “franchise” player he took over the right field in order to get that last chance to produce his credentials-and win that doubting manager a coveted pennant.

Well it still would be a short uneventful story if there wasn’t some greed, sex, and redemption to round the drama out. The greed came in two parts-one, Pops had under financial duress made a deal with the devil selling part of his franchise, enough to lose control of the club-unless he won a pennant. The other was the Chicago Black Sox-like gambling gag that has always followed sports and which always will in the hands of some Abe Saperstein-type looking for whatever edge he could get when putting down those big pay-out dollars. The best way to do that was to have, let us say, the star player under his wing. Especially a guy like Roy who could turn it on and off like a faucet. But big time gamblers don’t get to be big time gamblers eating fancy steaks and living the high life depending on quirky unknowns so our Gus, the gambler, had two ways to try to squeeze the play. One, providing Roy with some high-end sex with Memo, played by Kim Basinger, and the other digging out the dirt on why a 35 year old guy with plenty of talent never came up on the radar before. The emissary for the dirty work was a flinty sports’ writer named Mercy, played by Robert Duvall, who dug deep and found out that whole sordid deal with that crazy woman who wasted Roy in that dreaded hotel room in his youth and her subsequent suicide out of the that same hotel room window. Judge Landis would not like that image of baseball splattered all over the back pages of the newspapers.

The redemption. Well one day when Roy, living that high life with Memo, was in a deep slump from not taking care of baseball business in Chicago (in Wrigley Field until recently the graveyard of many Cubs fans dreams so why not Roy’s) a vision in white dress showed up in the stands and the slump was over. Turned out that the lady, Iris, played by Glenn Close was Roy’s back home sweetheart long abandoned after Roy headed out to seek fame and fortune. Turned out too that Iris has a son, a son say sixteen years old, not living with the boy’s father who was living in New York (yeah, I know a weak part of the plotline). Eventually with the pennant on the line (and ownership of the Knights slipping from Pop’s hands) and that gambler having taken extra insurance by having another player on the team in the bag Roy had one last chance to go for glory. It was a close thing though, his favorite bat exploded on him and Iris also had to pull out the old chestnut that her boy was Roy’s son. You know Roy popped one out of the stadium. Yeah, Roy the All-American Boy could hit that thing. Could make that boyhood dream come true even if only for a minute. Hell most of us don’t get one chance much less two. Great baseball movie.
Posted by american left history at 3:02 PM