*****President Obama Pardon Chelsea Manning Now!-The Struggle Continues ….We Will Not Leave Our Sister Behind

*****President Obama Pardon Chelsea Manning Now!-The Struggle Continues ….We Will Not Leave Our Sister Behind 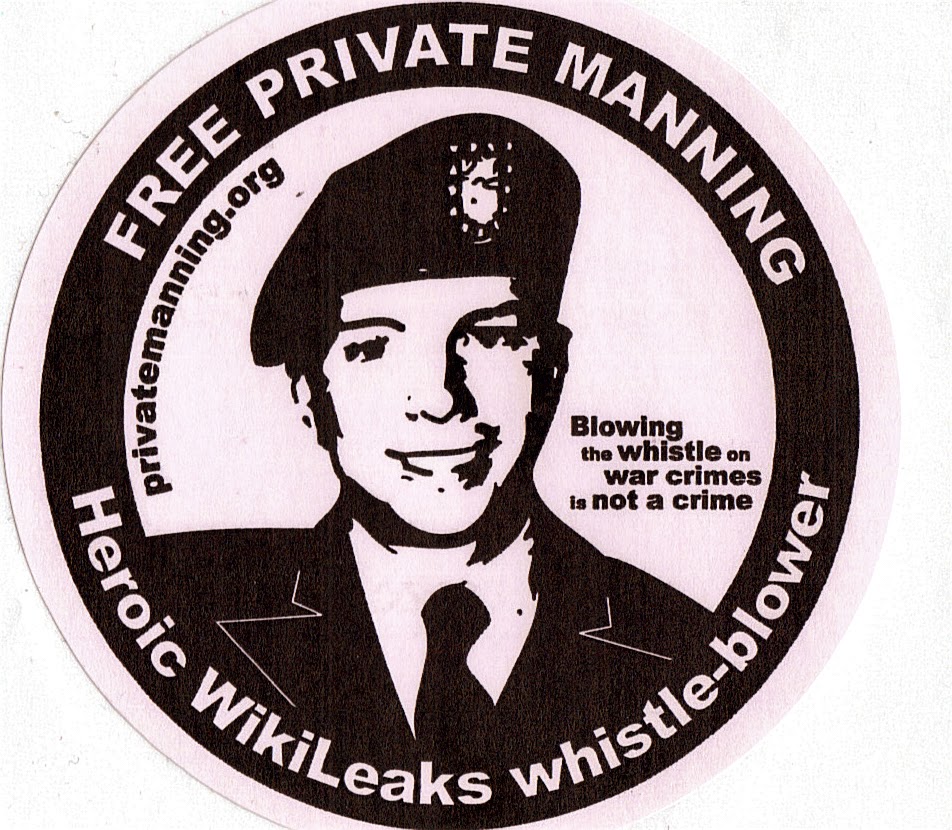 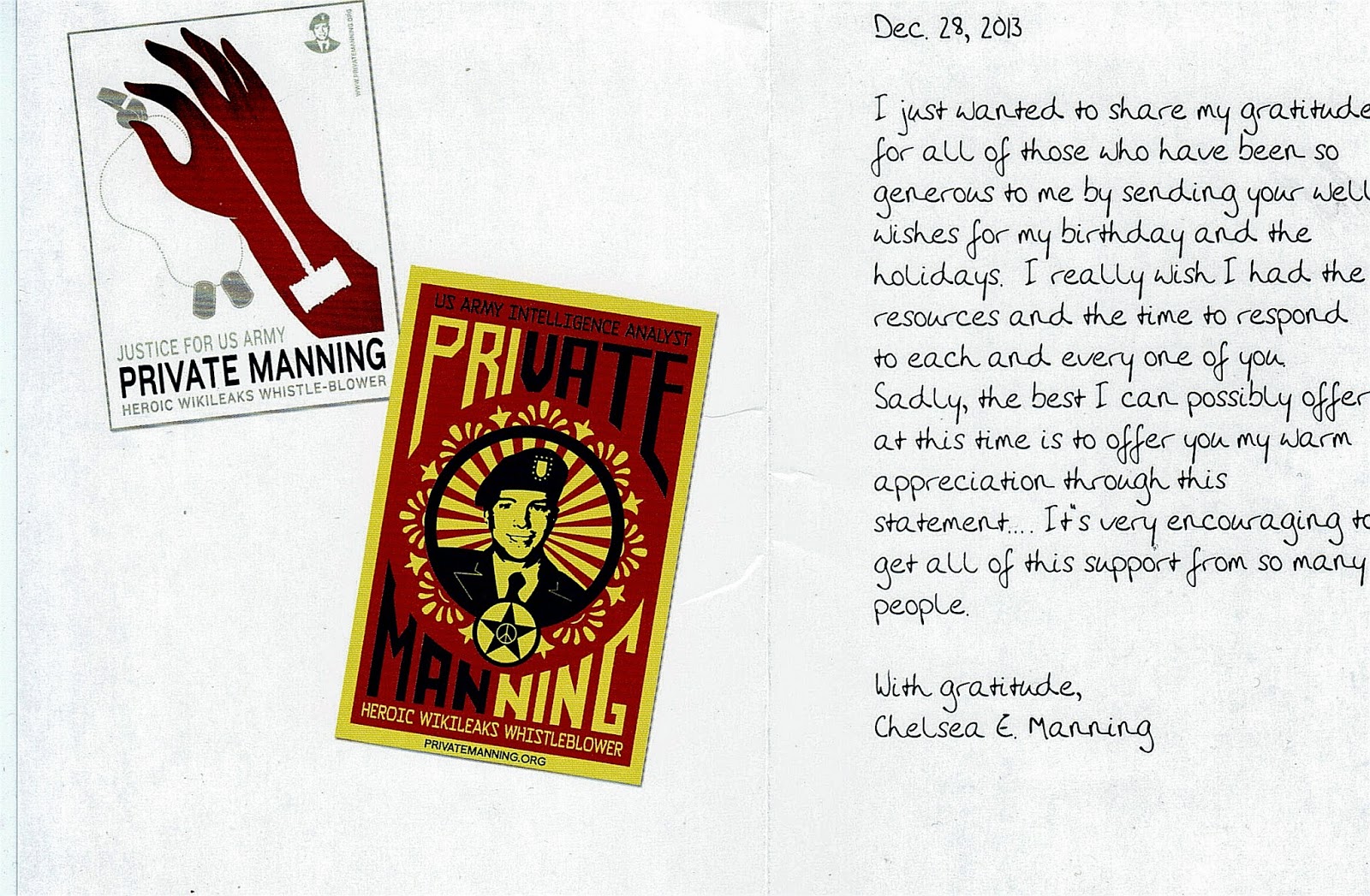 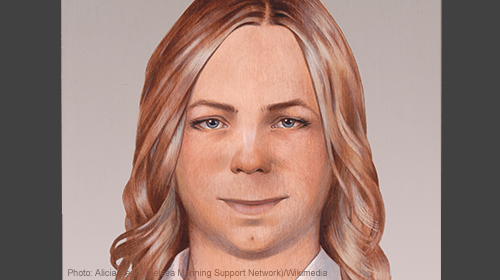 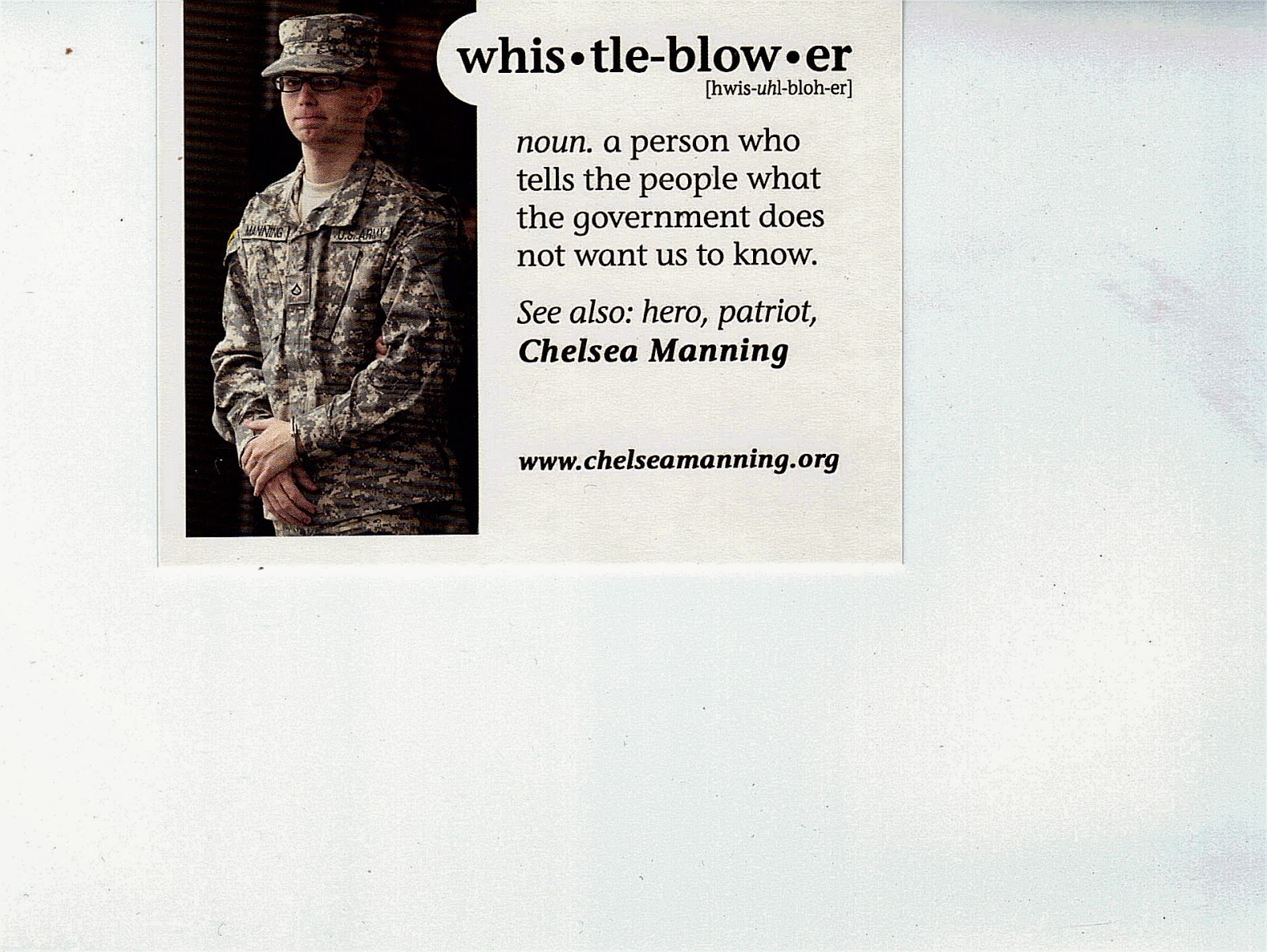 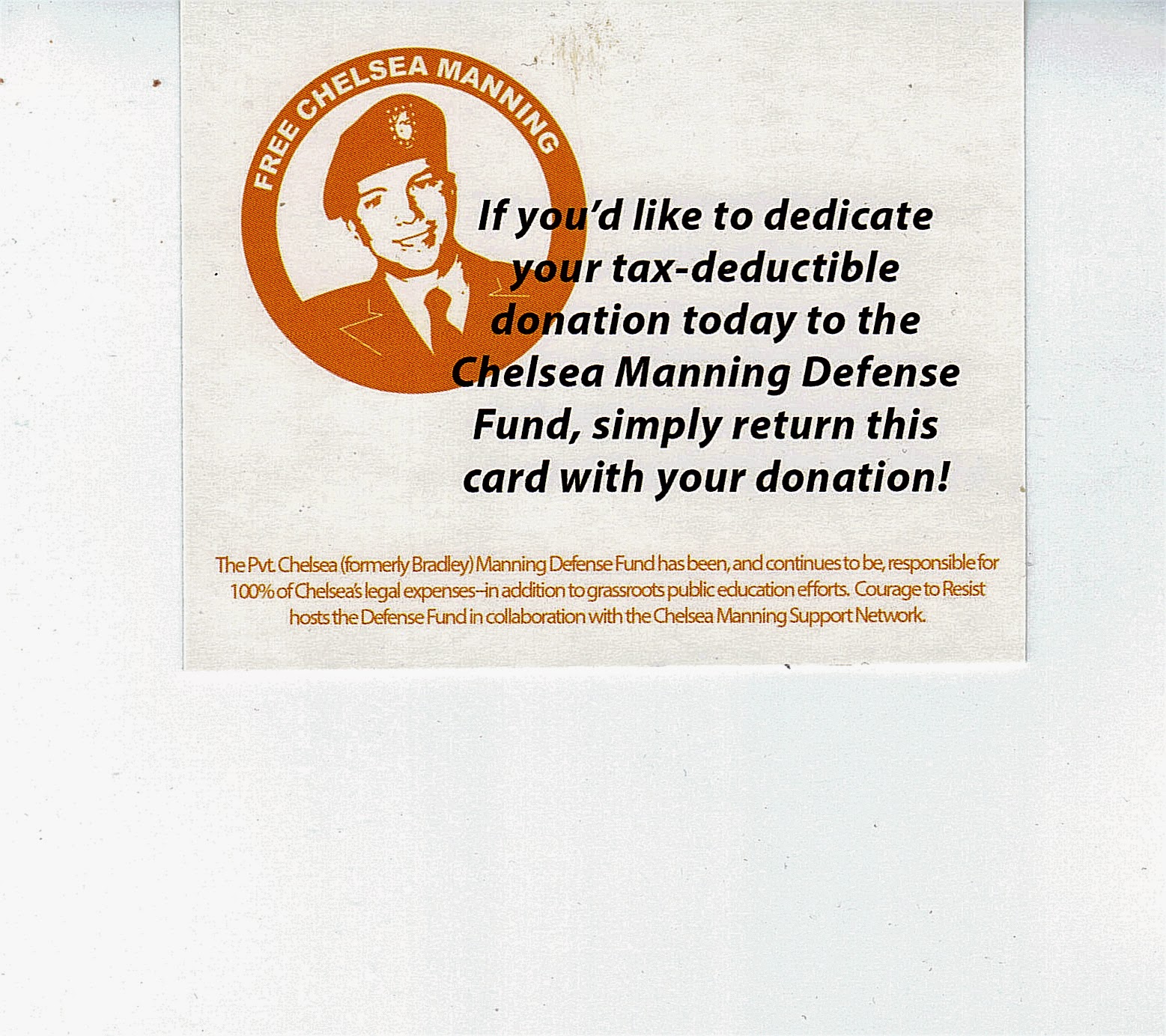 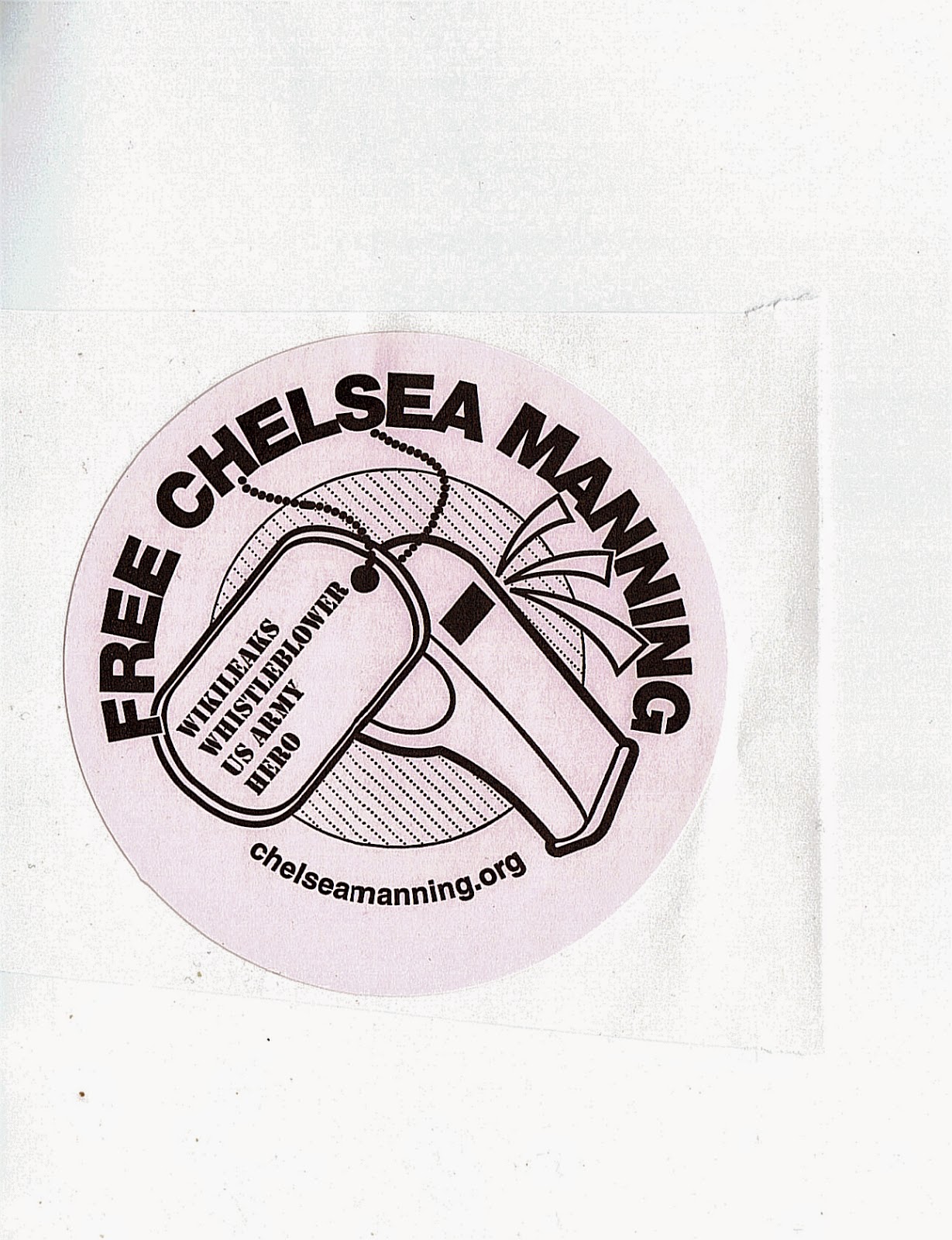 A while back, maybe a year or so ago, I was asked by a fellow member of Veterans For Peace at a monthly meeting in Cambridge about the status of the case of Chelsea Manning since he knew that I had been seriously involved with publicizing her case and he had not heard much about the case since she had been convicted in August 2013 (on some twenty counts including several Espionage Act counts, the Act itself, as it relates to Chelsea and its constitutionality will be the basis for one of her issues on appeal) and sentenced by Judge Lind to thirty-five years imprisonment to be served at Fort Leavenworth in Kansas. (She had already been held for three years before trial, the subject of another appeals issue and as of May 2015 had served five years altogether thus far and will be formally eligible for parole in the not too distant future although usually the first parole decision is negative).

That had also been the time immediately after the sentencing when Private Manning announced to the world her sexual identity and turned from Bradley to Chelsea. The question of her sexual identity was a situation than some of us already had known about while respecting Private Manning’s, Chelsea’s, and those of her ardent supporters at Courage to Resist and elsewhere the subject of her sexual identity was kept in the background so the reasons she was being tried would not be muddled and for which she was savagely fighting in her defense would not be warped by the mainstream media into some kind of identity politics circus.

I had responded to my fellow member that, as usual in such super-charged cases involving political prisoners, and there is no question that Private Manning is one despite the fact that every United States Attorney-General including the one in charge during her trial claims that there are no such prisoners in American jails only law-breakers, once the media glare of the trial and sentencing is over the case usually falls by the wayside into the media vacuum while the appellate process proceed on over the next several years.

At that point I informed him of the details that I did know. Chelsea immediately after sentencing had been put in the normal isolation before being put in with the general population at Fort Leavenworth. She seemed to be adjusting according to her trial defense lawyer to the pall of prison life as best she could. Later she had gone to a Kansas civil court to have her name changed from Bradley to Chelsea Elizabeth which the judge granted although the Army for a period insisted that mail be sent to her under her former male Bradley name. Her request for hormone therapies to help reflect her sexual identity had either been denied or the process stonewalled despite the Army’s own medical and psychiatric personnel stating in court that she was entitled to such measures.

At the beginning of 2014 the Commanding General of the Military District of Washington, General Buchanan, who had the authority to grant clemency on the sentence part of the case, despite the unusual severity of the sentence, had denied Chelsea any relief from the onerous sentence imposed by Judge Lind.

Locally on Veterans Day 2013, the first such event after her sentencing we had honored Chelsea at the annual VFP Armistice Day program and in December 2013 held a stand-out celebrating Chelsea’s birthday (as we did in December 2014 and will do again this December of 2015).  Most important of the information I gave my fellow VFPer was that Chelsea’s case going forward to the Army appellate process was being handled by nationally renowned lawyer Nancy Hollander and her associate Vincent Ward. Thus the case was in the long drawn out legal phase that does not generally get much coverage except by those interested in the case like well-known Vietnam era Pentagon Papers whistle-blower Daniel Ellsberg, various progressive groups which either nominated or rewarded her with their prizes, and the organization that has steadfastly continued to handle her case’s publicity and raising financial aid for her appeal, Courage to Resist (an organization dedicated to publicizing the cases of other military resisters as well).

At our February 2015 monthly meeting that same VFPer asked me if it was true that as he had heard the Army, or the Department of Defense, had ordered Chelsea’s hormone therapy treatments to begin. I informed him after a long battle, including an ACLU suit ordering such relief, that information was true and she had started her treatments a month previously. I also informed him that the Army had thus far refused her request to have an appropriate length woman’s hair-do. On the legal front the case was still being reviewed for issues to be presented which could overturn the lower court decision in the Army Court Of Criminal Appeals by the lawyers and the actual writing of the appeal was upcoming. A seemingly small but very important victory on that front was that after the seemingly inevitable stonewalling on every issue the Army had agreed to use feminine or neutral pronoun in any documentation concerning Private Manning’s case. The lawyers had in June 2014 also been successful in avoiding the attempt by the Department of Defense to place Chelsea in a civil facility as they tried to foist their “problem” elsewhere.
On the political front Chelsea continued to receive awards, and after a fierce battle in 2013 was finally in 2014 made an honorary grand marshal of the very important GLBTQ Pride Parade in San Francisco (and had a contingent supporting her freedom again in the 2015 parade). Recently she has been given status as a contributor to the Guardian newspaper, a newspaper that was central to the fight by fellow whistle-blower Edward Snowden, where her first contribution was a very appropriate piece on what the fate of the notorious CIA torturers should be, having herself faced such torture down in Quantico adding to the poignancy of that suggestion. More recently she has written articles about the dire situation in the Middle East and the American government’s inability to learn any lessons from history and a call on the military to stop the practice of denying transgender people the right to serve. (Not everybody agrees with her positon in the transgender community or the VFP but she is out there in front with it.)

[Maybe most important of all in this social networking, social media, texting world of the young (mostly) Chelsea has a twitter account- @xychelsea
Locally over the past two year we have marched for Chelsea in the Boston Pride Parade, commemorated her fifth year in prison last May [2015] and the fifth this year with a vigil, honored her again on Armistice Day 2015, celebrated her 28th birthday in December with a rally.
More recently big campaigns by Courage To Resist and the Press Freedom Foundation have almost raised the $200, 000 needed (maybe more by now) to give her legal team adequate resources during her appeals process (first step, after looking over the one hundred plus volumes of her pre-trial and trial hearings, the Army Court Of Criminal Appeal)

Recently although in this case more ominously and more threateningly Chelsea has been charged and convicted of several prison infractions (among them having a copy of the now famous Vanity Fair with Caitlyn, formerly Bruce, Jenner’s photograph on the cover) which could affect her parole status and other considerations going forward.

We have continued to urge one and all to sign the on-line Amnesty International petition asking President Obama to grant an immediate pardon as well as asking that those with the means sent financial contributions to Courage To Resist to help with her legal expenses.

After I got home that night of the meeting I began thinking that a lot has happened over the past couple of years in the Chelsea Manning case and that I should made what I know more generally available to more than my local VFPers. I do so here, and gladly. Just one more example of our fervent belief that as we have said all along in Veterans for Peace and elsewhere- we will not leave our sister behind… More later.