Arson, My Sweet-With Cary Grant’s Talk Of The Town In Mind (1942)-a Film Review

Arson, My Sweet-With Cary Grant’s Talk Of The Town In Mind (1942)- Film Review 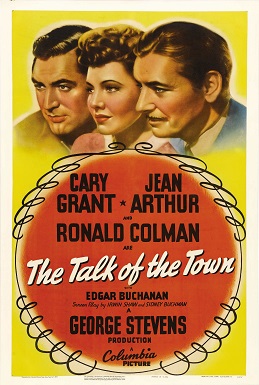 No question the late 1930s, early 1940s was the golden age of romantic comedies, and if it was left at that this film under review directed by George Stevens one of the three best such directors along with Preston Sturgis and Frank Capra (and maybe a fourth with Howard Hawks but you can bicker among yourselves on that one), The Talk of the Town, would survive scrutiny in that category. Certainly with well-known skilled comedic actor Cary Grant at that phase of his career and Jean Arthur the wise almost girl next door with the heartland heart of gold in the lineup with her own set of comedic skills the argument could be made for throwing this one under that category.

But hear me out on this one. Agreed that the late 1930s and early 1940s were something like the golden age of romantic comedy which were necessary in the hard-bitten Great Depression times to keep people from falling off their chairs but it was also the age of social dramas, movies that took on some of the social issues that pressed against the times. Here’s the play. Leopold Dilg (played by Grant) is something of a poor man’s social philosopher who winds up on the wrong side of the stick when the local town factory goes up in flames and the foreman is allegedly killed as the place burns to the ground. The owner accused the rabble-rouser Dilg of the dirty deed and is able to make it stick, make it stick with a slander campaign that gets the town all riled up at the agitator. So they are ready, well, a jury of his peers and county men are ready to make him take the big step-off since he cannot prove that he did not do the deed.

Being a smart guy and knowing that if “justice” prevails he is liable to be at the short end of a rope Dilg escapes the bastinado and eventually winds up at the house that Miss Nora Shelley (played by Arthur) is preparing for law school dean Lightcap (played by straight man Ronald Colman) who is looking for a little peace and quiet in order to write a nice little lawyerly book about the virtues of the rule of law. Naturally Nora cannot feed Dilg to the wolves on his trail s so there is a slew of misadventures to keep the wolves away from Leopold but also to keep stickler for the law Professor Lightcap in the dark about his presence.

Eventually the good professor catches on about who Dilg really is and is ready to send for the gendarmes and let justice take its due course. Along the way the good professor is told that he has been nominated by the President to be on the United States Supreme Court and so he had better keep his nose clean, keep a low profile. Naturally everything militates against that as he is dragged into Dilg’s defense both by Nora’s entreaties and by the cut of Dilg’s jibe (that fellow philosopher king business). Through stealth and just plain pluck the good professor finds out that the allegedly dead foreman is not but hiding out in the wilds of Boston. The whole arson thing had been a caper by the failing owner of the factory and the foremen to grab the insurance money and run. Although it was a close thing the rule of law trumped that of mob rule (the influential had the townspeople all riled up and ready for a lynching). In between it turned out that both the fellow philosophers had eyes for wholesome heartland girl-next-door Nora but you know as well as I do that Dilg/Grant would win that battle. But do you see what I mean about his being more than a romantic comedy and more of a social drama. You decide, okay.
Posted by american left history at 11:26 AM