*****Yes, You Had Better Shake, Rattle And Roll That Thing-With Big Joe Turner In Mind


*****Yes, You Had Better Shake, Rattle And Roll That Thing-With Big Joe Turner In Mind 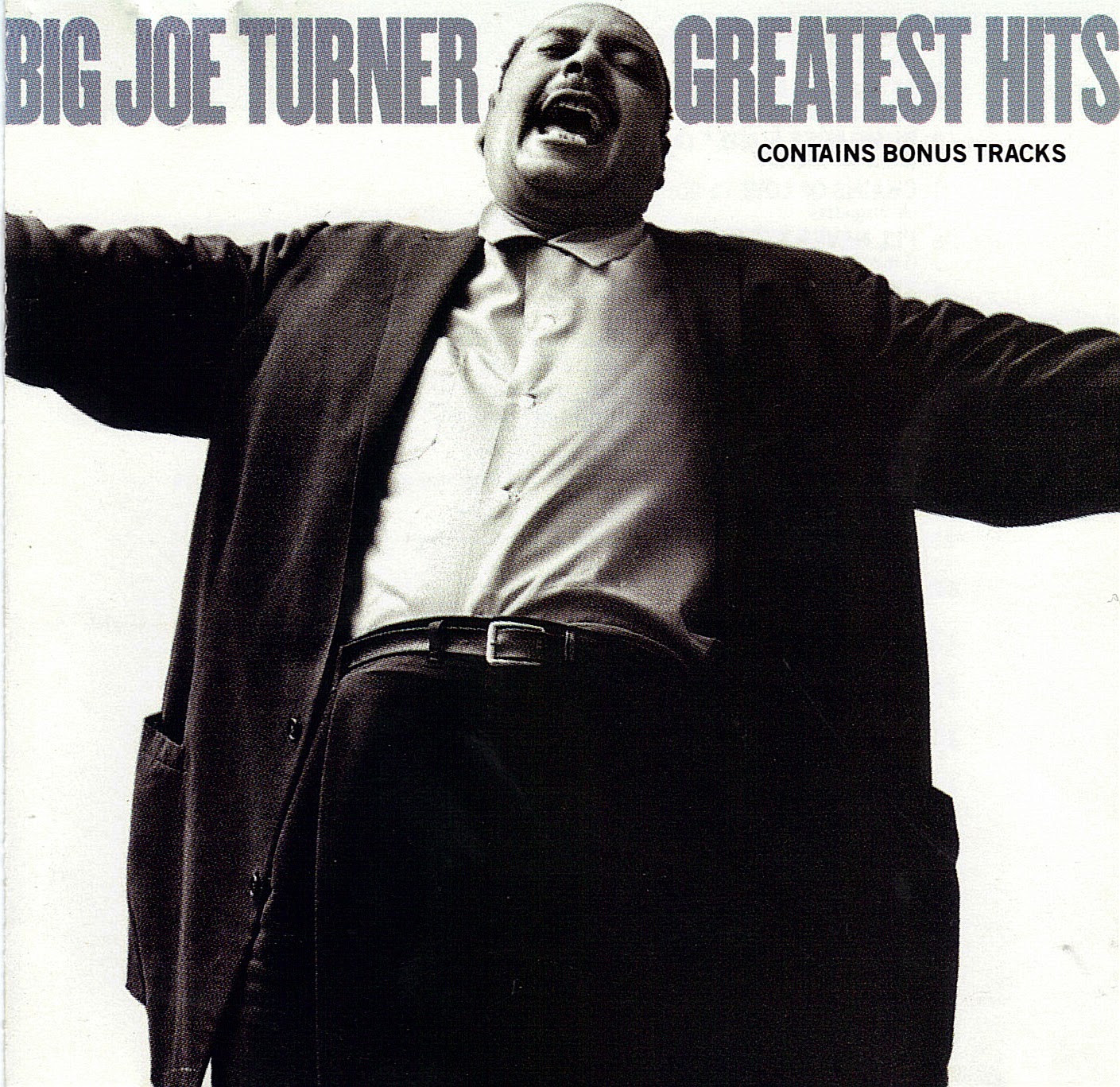 From The Pen Of Bart Webber

In the old days, the old days meaning around the turn of the century, the 20th century let’s make it clear, when the songs of the people, of Mister’s plantation miseries and his kindred sharecropper rip-off woes were just starting to be weaned off of the old time religion gospel high heaven Jehovah savior be with us poor and despised hymn book provided by Master’s so-called good wishes a man could speak of more mundane things and not be damned (or a woman either but that would come later when the female blues-belters came to prominence in the small towns of the South, you know the infinite number of Smith’s including Queen bee Bessie).

Yes it took a while to undo that wretched thing dropped down on the planation by Master’s devious methods way back when, when he took the forbears from out of Africa, pushed the Middle Passage and then robbed man, woman and child by placing you know the damn Christian yoke around every neck to add insult to injury, slavery times injury as if Master’s whip was not enough. You know got the precious brethren of the light to get behind that compulsion to testify, to call yourself own truth self a sinner against some forlorn god who was not listening as the more savvy of the brethren figured out, figured out fast come rebellion time, come time to stand up and cross the lines to the Union side with what you had on your back or what you could grab from Master’s ill-provisioned shack. That damn music that accompanied the psalms to consider yourself "saved." We know how hard it was to not see the new dispensation, the new secular worldview as some of the devil’s work, the devil’s work, the devil’s music in some households all the way up to rock and roll  and not just in some Baptist-tinged folks but hardy white dirt poor Catholic believers too.

The music of the folk had come down from the muddy swamps, down from Mister’s sweated plantation field, down from the stinking turpentine factories and bloody sawmills and in place of praise the lord, lord save us, lord lead us to the promise land began to speak of some rascal like Mister Joe Turner (not the Joe Turner of the title above but mentioned below but a ne’er-do-well who came and stole whatever could be stolen) began of speaking of hard, hard drinking, hard lovin’ maybe with your best gal's friend if it came right down to the core, maybe flipping the bird on you and running around all flouncy with your best friend, maybe some hard-hearted "do this do that" woman on your mind, yeah, the old birth of  the blues days, the blue being nothing but a good woman or man on your mind anyway, around the turn of the 20th century and you can check this out if you want to and not take my word for it a black guy, a rascally black guy of no known home, a drifter, maybe a hobo for all I know, and who knows what else named Joe Turner held forth among the folk. Old Joe would come around the share-cropper down South neighborhoods and steal whatever was not nailed down, including your woman, which depending on how you were feeling might be a blessing and if you in a spooning mood might be a curse on that bastard's head. Then Joe Turner would leave and move on to the next settlement and go about his plundering ways. Oh sure like lots of blues and old country music as it got passed on in the oral traditions there were as many versions of the saga as there were singers everybody adding their own touch. But it was always old Joe Turner doing the sinning and scratching for whatever he could scratch for.

But for the most part the story line about old ne’er-do-well Joe Turner rang very similar over time. So Joe Turner got his grizzly old self put into song out in the Saturday juke joints, out in the back woods sneak cabin with no electricity, maybe no instruments worthy of the name either, some old beat to perdition Sears catalogue order guitar, hell, maybe just some wire between two nails if times were tough or that Sears model was in hock at some Mister’s pawnshop, out in places like the Mississippi Delta where more legends were formed than you could shake a stick, got sanctified (the once church gospel holy amen kind just didn’t do the job when a man had the thirst) on old  Willie’s liquor, white lightning home-made liquor got to working, and some guy, maybe not the best singer if you asked around but a guy who could put words together to tell a story, a blues story, and that guy with a scratch guitar would put some verses together and the crowd would egg him on. Make the tale taller as the night went until everybody petered out and that song was left for the next guy to embellish.

By most accounts old Joe was bad man, a very bad man, bad mojo man, bad medicine as the folk call what ails but can't be fixed just short of as bad as Mister’s plantation foremen where those juke joint listeners worked sunup to sundown six days a week or just short of as bad as the enforcers of Mister James Crow’s go here, not there, do this not that, move here not there laws seven days a week. Yeah, Joe was bad alright once he got his wanting habits on, although I have heard at least one recording from the Lomaxes who went all over the South in the 1930s and 1940s trying to record everything they could out in the back country where Joe Turner was something like a combination Santa Claus and Robin Hood. Hell, maybe he was and some guy who lost his woman to wily Joe just got sore and bad mouthed him. Passed that bad mouth on and the next guy who lost his woman to somebody pinned the rap on Joe, Joe Turner, yeah it was that old rascal that did her in, turned her against her hard-working ever-loving man. Stranger things have happened.

In any case the Joe Turner, make that Big Joe, Turner I want to mention here as far as I know only stole the show when he got up on the bandstand and played the role of “godfather” of rock and roll. Yeah, that is what I want to talk about, about how one song, and specifically the place of Big Joe and one song, Shake Rattle and Roll in the rock pantheon. No question Big Joe and his snapping beat has a place in the history of rhythm and blues which is one of the musical forbear strands of rock and roll. The question is whether Shake is also the first serious effort to define rock and roll. If you look at the YouTube version of Big Joe be-bopping away with his guitar player doing some flinty stuff and that sax player searching for that high white note and Big Joe snapping away being  very suggestive about who should shake and what she should shake you can make a very strong case for that place. Add in that Bill Haley, Jerry Lee, and Elvis among others in the rock pantheon covered the song successfully and that would seem to clinch the matter.

In 2004, the fiftieth anniversary of the debut of Shake by Big Joe, there had been considerable talk and writing again as there is on such occasions by some knowledgeable rock critics about whether Shake was the foundational song of rock. That controversy brought back to my mind the arguments that me and my corner boys who hung out in front of Jimmy Jack’s Diner in Carver, a town about thirty miles south of Boston, had on some nothing better to do Friday nights during high school (meaning girl-less, dough-less or both nights). I was the primary guy who argued for Big Joe and Shake giving that be-bop guitar and that wailing sexy sax work as my reasoning while Jimmy Jenkins swore that Ike Turner’s frantic piano-driven and screeching sax Rocket 88 (done under an alias of the Delta Cats apparently for contract reasons a not uncommon practice when something good came up but you would not have been able to do it under the label you were contracted to) was the be-bop beginning and Sam Lowell, odd-ball Sam Lowell dug deep into his record collection, really his parents' record collection which was filled mainly with folk music and the blues edge played off that to find Elmore James’ Look On Yonder Wall. And the other corner boys like our leader Frankie Riley lined up accordingly (nobody else came up with any others so it was those three).

Funny thing Frankie and most everybody else except I think Fritz Taylor who sided with Jimmy Jenkins sided with me and Big Joe. The funny part being that several years ago with the advent of YouTube I started to listen to the old stuff as it became available on-line and now I firmly believe that Ike’s Rocket 88 beats out Shake for the honor of the be-bop daddy of rock and roll. As for the old time Joe Turner, done come and gone, well, he will have to wait in line like the rest of us if he wants his say. What do you think of that?