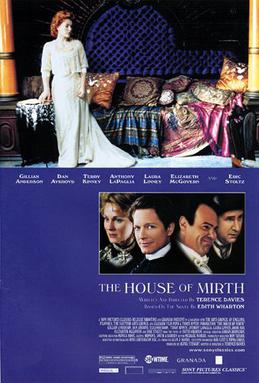 The House Of Mirth, starring Gillian Anderson, Terry Kinney, based on the bool of the same name by Edith Wharton, 2000

Greg Green the new site manager has encouraged us in reviews and other assignments for this blog to tell a little about how we got the assignment. His idea is to give the reader an idea about how the assignment process goes and why. Others have written more extensively than I will do here about how they got their assignments but it basically boils down to two points. First, as a new writer here (although I had been around the hard copy of this publication when fellow writer Josh Breslin and I were companions before I moved on to a by-line in Modern Women Today), I had expressed an interest in dawn of the 20th century period pieces and had as my first review the film adaptation of Oscar Wilde’s The Ideal Husband which dealt with late Victorian mores and morals around the marriage agreement in English high society. The second merely that I had read the book version of Edith Wharton’s House of Mirth and Greg insisted that I do the film adaptation review after he had expressed satisfaction with the Wilde review.

Of course Edith Wharton through her own high society birth and its inherently informative connections was well-placed to do writing on the later robber baron period in America after the ruthless original industrial magnate founders got “civilized.” So high society and it foibles as demonstrated here was like catnip for her. The interesting aspect though is not the main character Lily Bart’s error of judgement that would eventually lay her low but how tenuous the situation was for young women, maybe all women, without direct access to serious money in an age when men for the most part controlled the purse strings and the property deeds. One would have thought that the rich and famous despite her foibles would have provided a safety net for one of their own. Not so in Lily’s case, not so at all.

Once that aspect of Lily’s life, of the way the episodes were portrayed in the film, is understood then a lot of the mistakes she made along the way beyond her own somewhat frivolous innocence makes a certain amount of sense. Dependent on what a rich aunt would leave her in some future she had to avoid marrying some poor guy like Seldon whom she loves and was something of a soulmate despite his stiff manner, and he loves her despite her predilection for a man with serious money to ease her way but cannot think to marry. That tension will drive both their relationship and that series of errors and missteps which will lead her down the class ladder and to an early grave via her hubris and dope dependency, that landudum which will ease her deep depression and isolation once she cannot depend on high society to cover up her mistakes. Bastards. On the way though we glimpse at the hypocrisy of that old established monied class when one of their own, only if marginally one of their own, doesn’t know how to play by the rules of the game. And a guy like Seldon finds out too late that he could have saved his Lily.

Aside from the dramatic interludes and a pretty faithful adherence to the Wharton storyline the costumes, the scenery and Gillian Anderson’s Lily are beautifully done. I hope though on the basis of two film reviews that I don’t get tagged doing these “women” films. Or super-hero ones either that Greg Green has threatened us allto do to “broaden our horizons.”
Posted by american left history at 7:37 PM