Lucy Herschel, a paralegal with the Legal Aid Society in New York City, reports on the Trump administration’s latest assault on immigrant communities and what advocacy groups are doing to push back.
October 9, 2018
THE TRUMP administration is opening up a new front in its scorched-earth anti-immigrant campaign, this time taking aim at visa holders and visa seekers.
Since the initial days of his administration, Donald Trump has waged an all-spectrum, multi-front war on immigrants of all statuses in this country, with Black and Brown immigrants being the obvious target.
This war has ranged from the Muslim ban, to the sickeningly inhumane treatment of child refugees, to ramped-up efforts to retroactively strip citizenship in certain cases.
The intended message is clear: No one is safe, especially if you are nonwhite and low income.
So here’s what’s new: On September 22, the Department of Homeland Security issued a new proposed rule that would massively expand the definition of who they consider to be a potential “public charge,” and therefore not eligible for entry, visa renewal or permanent status. In the past, “public charges” were restricted primarily to people receiving government cash assistance or who were likely to need institutionalized care. 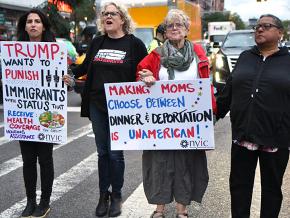 Activists protest Trump's new welfare restrictions for immigrants in New York City (New York Immigration Coalition | Facebook)
One aspect of the rule change would be to consider any history of receipt of government assistance, from Medicaid and Medicare to food and housing assistance, as “heavily weighed negative factors” when determining whether an applicant should be granted a visa or green card.
This would effectively prevent millions of documented immigrants from applying for government benefits they are legally entitled to. Clinton-era welfare reforms already restrict the availability of public assistance to many legal immigrants, and undocumented immigrants are barred from nearly all assistance programs. Nonetheless, millions of low-income immigrants rely on some type of assistance or another.
The rule would impact everyone — from the parent whose child receives food or medical assistance, to elderly immigrants on Medicare Plan D, to a U.S. citizen seeking to sponsor a spouse or a family member.
But the rule change goes beyond the use of public assistance.
“In determining whether an immigrant would become a public charge, USCIS [U.S. Citizenship and Immigration Services] will also consider factors such as age, health, family status, assets, education and skills,” explained immigration attorney Soo Kyung Vitale. “In sum, this is an all-out attack on the poor, the sick and the less educated.”
While certain categories of visa holders will be exempt under the current version of the rule, earlier leaked drafts did not have such exemptions. Thus, the panic among visa holders has been universally felt. Rumors of the proposed change have been circulating since the beginning of the year and have already had a devastating impact. Fear among immigrant communities has led to a significant drop in enrollment for food assistance programs such as the Supplemental Nutrition Program for Women, Infants and Children (called WIC) and the Supplemental Nutrition Assistance Program (or SNAP, formerly known as food stamps).
On September 24, immigrant rights and social service advocates, led by the New York Immigration Coalition (NYIC), staged a rally and direct action in front of New York City’s historic Tenement Museum to protest the proposed rule change.
“We have HIV positive clients consulting counselors on whether they should suspend their HIV medication while they apply for a green card,” said Amanda Lugg of the African Services Committee and one of 14 people arrested blocking traffic to protest the change. She also noted how the proposed change “violates long-standing protections for people living with HIV/AIDS under disability discrimination law” and “essentially operates as a backdoor reinstatement of the HIV immigration ban.”
“If adopted, the rule will create a nationwide health crisis impacting millions and deter families from seeking vital medical care when they need it the most,” said Hasan Shafiqullah of the Immigration Law Unit at the Legal Aid Society.
BY DEFINING anyone who legally accesses these programs as a potential “public charge,” Trump is simultaneously taking aim at low-income Black and Brown immigrants on the one hand and public assistance programs themselves on the other.
The reality is that public assistance has become part and parcel of the U.S. economy and working-class life. According to a 2016 Economic Policy Institute report, a majority of workers making $9.91 an hour or less, or about a fifth of all wage earners, receive some sort of public assistance, either directly or through a family member.
In addition, nearly half of all working recipients of public assistance work full time. In reality, low-wage employers rely on government assistance programs to subsidize and maintain a relatively stable workforce. In 2014 Forbes magazine reported that Walmart’s low wages were costing taxpayers $6.2 billion a year in public assistance to its employees.
As Alison Hirsh, vice president of SEIU Local 32BJ, put it, “With poverty wages, unaffordable health care options and rampant food insecurity across the country, a reliance on public assistance is not a fair indication of how much a person contributes to their communities.”
Along with Trump’s comments denigrating immigrants from “shithole” countries, this current rule change underlines that the primary targets of this attack are low-income Black and Brown immigrants. Trump has no problem with family reunification policies (or in Trumpspeak, “chain migration”) when it allows his in-laws to become citizens, but he wants to bar those he deems “inferior” from taking advantage of those same pathways.
While Democratic Party politicians line up to pose as defenders of immigrant rights, this current assault can be tracked directly to the attacks on both low-income immigrants and government entitlement programs ramped up by the Clinton administration in the ’90s.
And while Mayor Bill de Blasio claims that New York is a sanctuary city, his police department was out in overwhelming force at the NYIC protest and civil disobedience on September 24.
Nonetheless, activists pledged to continue the fight to prevent this new rule from being instituted. Once the rule change is posted to the Federal Register, it is subject to a 60-day public comment period before implementation. Activists need to use this period not only to organize public commentary against the rule, but also to build broad action against this change.
That fight needs to foreground a defense of public assistance in a country where the labor of low-wage workers generates massive profits. Immigrant rights activists have their work cut out for them in order to reverse the decades-long war on immigrants and the poor that has culminated in this moment.

Get e-mail alerts from SocialistWorker.org

Targeting immigrants on public assistance
print print reply reply
Follow Us
Published by the International Socialist Organization.
Material on this Web site is licensed by SocialistWorker.org, under a Creative Commons (by-nc-nd 3.0) license, except for articles that are republished with permission. Readers are welcome to share and use material belonging to this site for non-commercial purposes, as long as they are attributed to the author and SocialistWorker.org.